THE quaint noises which of old winnowed the air of the city street have for the most part given place to the whir and rumble of the electric cars or the nerve-shaking rattle of wheels over uneven pavements. The spring, it is true, still brings the strident call of the vender of premature and astringent strawberries, and the old-rags-and-bottle men are, like the poor, always with us; but the mere volume of other sounds has drowned the more individual cries, as the English sparrows have driven away the song birds. It is not uncommon to hear travellers speak of the varied cries of the Old World towns and lament that this country should lack a feature so picturesque.

The laments of the average traveller, however, may well be distrusted whenever they pessimistically contrast his own land with those he has visited afar. In the present matter he is in nine times out of ten merely calling attention to the extent of his travels and the artistic character of his observations; probably in all ten cases he is unaware of the variety of street cries and calls which he might hear in his own city if he would. His real difficulty is not so much that the thing he laments is lacking as that no well-thumbed Baedeker has called his attention to it.

From time to time during half a dozen years between 1880 and 1890 I amused myself by writing down the street cries which came actually under my observation in Boston. The variety and often the quality of the cries surprised me. The average peripatetic vender is hardly up to the level pf the seller of snow-cooled beverages in Damascus, who importunes the passer to “refresh his heart,” of the flower merchant who saucily advises the purchase of his nosegays on the ground that they will “appease the mother-in-law,” or of the purveyor of sweetmeats declaring in Oriental hyperbole, “If an old woman eats of these she shall be young,” yet even in Boston he has more fancy and humor than is generally understood. If the cries which I have collected are not of great value in the science of ethnology, they may at least be found interesting and not unamusing.

Two trifles set me to noticing the cries of the Boston streets. I saw in a newspaper a paragraph telling of “a melodious newsboy” who went the rounds of Nassau Street, New York, “chanting in dulcet tones the plaintive lay:

‘Please buy my paper, just two cent,
And help my mother to pay the rent.’ ”

I cannot say that I had much faith in the genuineness of this; but whatever impression it made was strengthened by an absurd incident which will be remembered by those who eighteen years or so ago were living in Chestnut Street, Boston. An Italian peddler of brooms and dusters awoke the echoes of that venerably respectable neighborhood with a cry which to the virtuously indignant ears of the dwellers in the street sounded like: “D—d nice feather dusters!” The man was haled before a magistrate by a justly outraged citizen, whose name may be found in the daily papers of the time, and charged with an attack upon the virtue of the community. The hawker protested that he had said nothing but “Some nice feather dusters,” and by repeating the call in court satisfied the judge that such was the case. The laughter which the incident caused probably set more than one person to noting street cries, and certainly had much to do with the filling of the pages of my notebook.

In the business quarter of the town, the newsboys are naturally the most noteworthy criers; but next to them there were at the time of which I write none more prominent than the sooty venders of charcoal. The variety of the calls is great, and to this very fact is probably due the little notice which they attract. If all had one cry, its constant repetition would fix it in the public mind. The following are typical of the varied sorts, and all were heard often. 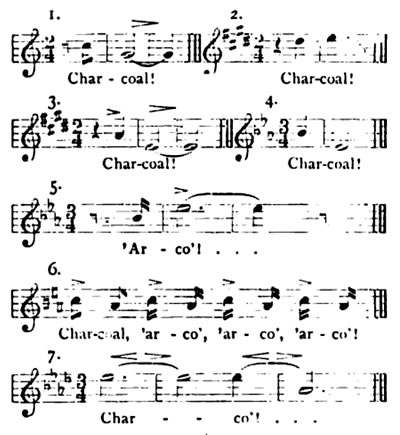 In streets where dwellings have place, and still more in lanes between, those back alleys where the ashmen and the icemen pass, the most common cry is that of the rag buyers. There is a certain dismal melancholy to almost all of the rag cries, the cheerful beat of “rag time” not having yet influenced the music of these singers; apart from this there is, as every dweller in Boston knows, a very wide variety. A large collection might be made, and I suppose that an inveterate theorist would deduce some sort of a generalization from it when it was completed. I have done no more than to set down a few of the cries which have fluttered up lamely to my window, like bats with wings broken. 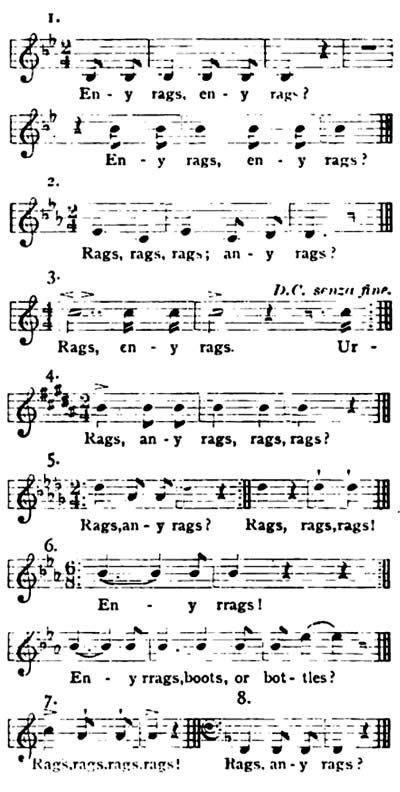 The most absurdly elaborate rag cry which I ever heard was one which belonged to a ragpicker who prowled about the West End. He would intone an improvisation, into which he now and then introduced with some crude skill allusions to events of the day, and having thus attracted attention he would go off into half a dozen repetitions of this:

The painful feature of the performance was that with every repetition the song was flatted about half a tone, with an effect unspeakably depressing. Now and then the lyric utterance would be poured out in this fashion:

This rag gatherer, like the duster merchant mentioned above, came through his art to figure in a police court. A severe and elderly virgin of the West End complained of him as a nuisance, declaring that his improvisations were improper. The judge asked the man what he sang; whereupon with the utmost coolness the varlet lifted up his voice and intoned the following, which was taken down by a shorthand reporter who happened to be in court that day:

“Old rags! Is it rags ye have or is it me ye want? Or is it fine daughters ye have for me? Or would ye like me for a lover? Sure it’s nice to be the father of a bouncing baby boy! Rrrrrags!”

The effect of such a canticle in a chaste Boston court must have been sufficiently startling; but the adventure had the result of making the singer very popular for a time in certain social circles. He was invited to a servants’ ball, and there asked to sing and dance for the edification of the company.

“An’ it’s the illigint fancy dancer he is!” declared the charwoman from whom I obtained my information. “Shure it ‘ud done ye good to see the sight ov him dancin’ all round the hall, takin’ the most illigint steps intoirely, and singin’ his rag song as large as loife whatever.”

The calls of the tinkers are probably the most musical that Boston can boast, and in the days of which I speak many of these were really rather pleasing. Not infrequently I have heard voices not without some remnants of original smoothness and even sweetness, pouring out such “profuse strains of unpremeditated art” as these:

The miscellaneous hawkers of fruit, fish, and domestic wares generally go about uttering howls which to all but well accustomed ears are inarticulate. Occasionally they sing fragments, more or less distorted, of old tunes. The following is a good example; and although it seems somewhat too musical to be associated with prosaic streets at the North End, it is genuine.

This call of a wood vender is also probably a reminiscence of the cadence of some song:

In the poorer quarters of the town the fish cries used to be abundant and varied. Indeed, all street calls are rare in the better parts of the city and proportionately plentiful where there is more marketing with itinerant venders. The fish sellers always seemed to me to be particularly shrill and penetrating in their voices, perhaps as an effect of eating their own wares. There may be a hint here for the teachers of singing. For two or three times a week I used to hear a wretched looking old man, a mere wreck of humanity, who yet gave his call in a clear, sweet voice not unworthy of a concert hall if he had other notes as good. Very likely what he uttered was his only stock and store, like the word of the raven; but the effect was striking of hearing come from this forlorn creature the single clear note:

Sometimes there was a quaint minor cadence:

As a rule, however, the fish cries were rather striking than pleasing. Here are some of them: 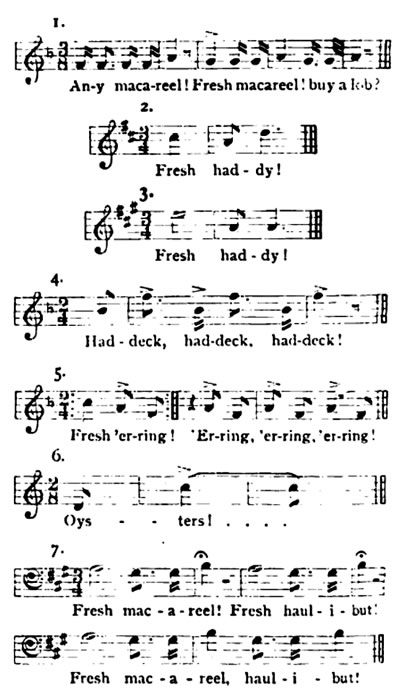 From the same part of town came these:

Not infrequently two voices took up the call, sometimes with an effect ludicrous enough.

The collection made was larger than this; but perhaps already more than enough space has been given to a matter rather curious than valuable. As already, however, such permanence as the cries recorded ever possessed seems to have passed away, they may afford amusement to the reader of antiquarian tastes. To any reader with a sense of humor, indeed, there is something ludicrous in such a cry as that of a vender who for some years offered in the neighborhood of Harrison Avenue the choicest of beef’s hearts with the constantly iterated call: