ANOTHER addition to the Street Cries of the World collection: Old London Cries. It’s by an anonymous author and appeared in the February 1847 edition of Fraser’s Magazine.

THERE ARE two new additions to Street Cries of the World (there’s not much else to do right now), both distinguished by being among the earliest printed depictions in Europe.

One is an originally untitled broadsheet from London which belonged to Samuel Pepys, who may have been responsible for cutting it up into sections. It has been dated by the scholar Sean Shesgreen to around 1620, making it possibily the oldest surviving printed pictorial representation of English street criers. 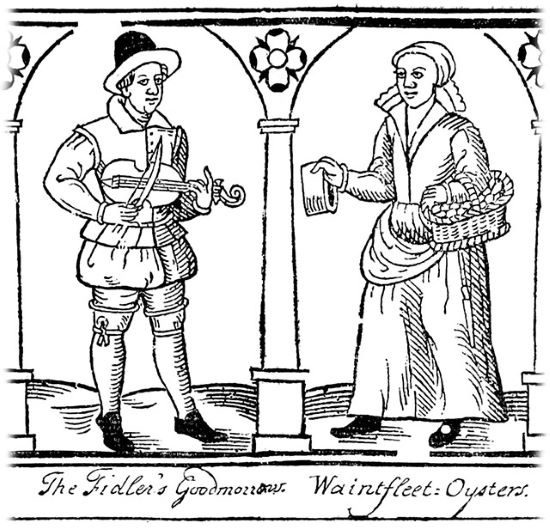 The second dates to 1582 and was printed by the Milanese engraver and cartographer Ambrogio Brambilla. Here the street sellers of Rome and what seem to be very brief renderings of their cries feature as 189 tiny portraits, all marching in unison from left to right. Although early, there is an even older series of portraits titled Cris de Paris dating to around the beginning of the 16th century. 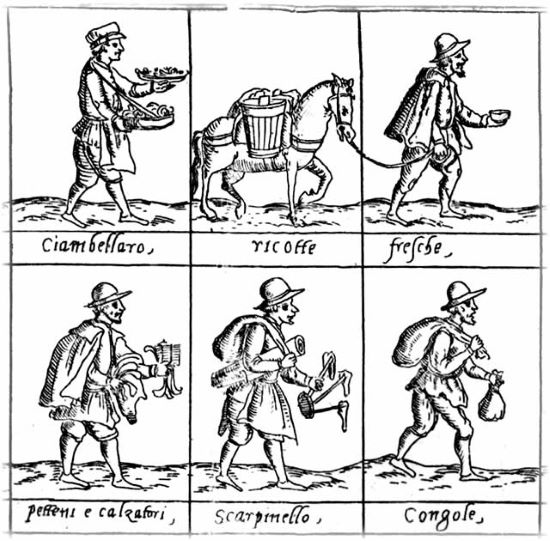 While the English broadsheet shows equal numbers of male and female sellers, the Brambilla portraits are all of men, made inscrutable by their smallness and lack of detail. It might be worthwhile to note the numbers of men and women in all the street cries publications and see whether the sex ratios depicted change over time, or differ between countries. My impression is that older publications show women pursuing a greater range of street trades than those from the latter part of the 19th century.

THERE IS a new addition to this website’s Street Cries of the World collection: Chapter XV: Local Vendors and Street Criers from Richardson Little Wright’s 1927 Hawkers & Walkers of Early America. 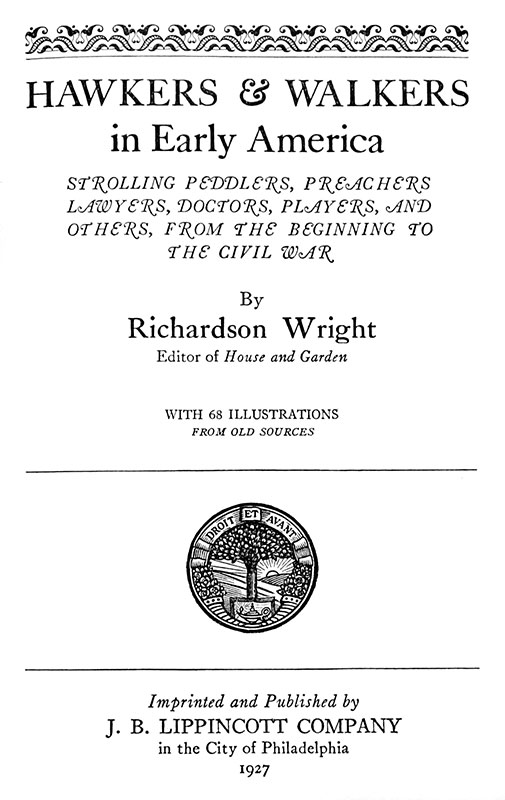 It’s an informative piece written in a chatty journalistic style. Also, suffused with the prejudices of its times, which I ought to forewarn you of if, for example, you’re thinking of drawing a child’s attention to some of its contents, such as the street cry rhymes.

THIS WEBSITE has a guestbook page where you can say hello and ask questions. A recent visitor was Guido from Switzerland who wanted to know more about the kind of equipment I use to make sound recordings.

The only substantial bit of kit I’ve bought recently is a Sony PCM D100 recorder. In brief, it’s a slightly chunky stereo handheld recorder with excellent on-board mics that can be swivelled inwards or outwards. This makes the D100 suitable for many different recording situations and it’s generally easy and fun to use. At the time of writing it costs in the region of £550.

I bought mine in the summer of 2019 after another handheld recorder developed a fault in one of the channels. At first I just used the D100 piggy-backed on my Sound Devices MixPre-D mic pre-amp, connected via the D100’s line-in socket. This kind of arrangement has been used by several recordists who wanted the quality of a Sound Devices pre-amp but couldn’t afford one of their 7-series recorders. It saves money but it’s cumbersome. In recent years it’s been made obsolete by more affordable high-quality recorders such as the Zoom F6 and the Sound Devices MixPre-3. 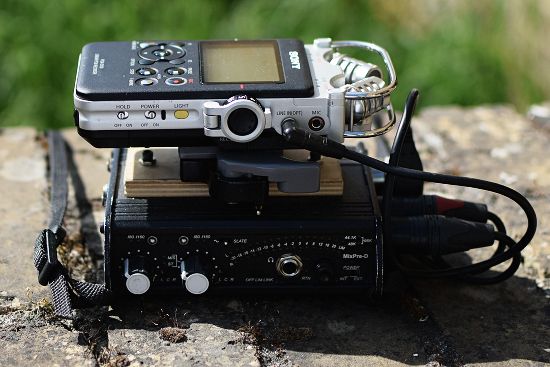 The D100 has a solid-feeling metal body, takes 4 AA batteries, has 32 GB of internal memory and takes SD cards and Sony Memory Sticks too. It has line-in and mic sockets, the latter providing plug-in power for use with small external mics, such as a binaural pair. So far so good.

The on-board mic capsules are very sensitive to being buffeted by the wind and to vibration from the recorder’s body. These weak points can be remedied in part by buying some inexpensive accessories.

First, wind noise. You cannot use the Sony D100 outdoors without a windshield except on a completely still day. You’ll also need a windshield if you want to use it for recording outdoor interviews, otherwise the speaker’s plosive buh and puh sounds can sound distorted. Even with a windshield it’s a good idea not to hold the mic very close to the speaker’s mouth.

The Sony comes with a windshield but it’s not very effective as the furry fibres are a bit short. I bought a better one with longer wind-taming fur off Amazon, sent by a supplier called Songbadger or DucklingPower or similar. Alternatively, Zoom make a Universal Windshield for their own recorders which also happens to fit the D100 and that too is an improvement.

The second drawback is the D100’s susceptibility to handling noise and this takes some getting used to. You have to grasp the recorder securely and then be continually mindful not to flex your hand or move any of its fingers by even the smallest amount. If it was any more sensitive it’d pick up your pulse.

One solution is to buy a cheap camera handle of the kind that are meant for video shooting with smartphones or compact cameras. The handle likely won’t cancel any vibrations from your hand but it will make it easier to hold the recorder comfortably for longer periods of time while keeping a steady grip. The one pictured below (along with the non-Sony windshield) has a lanyard so you won’t drop the damn recorder into a stream and costs £10 on Amazon. 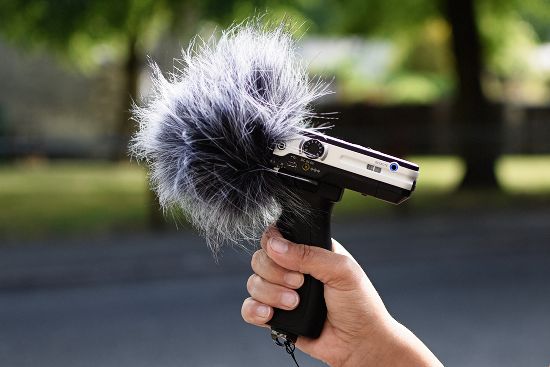 This setup is lightweight and very portable, but it isn’t discreet. Holding the recorder by a handle and pointing it towards some interesting sound is an assertive, purposeful gesture which will attract attention. As well as the eye-catching windshield, which some passersby will have the urge to touch, you may be using headphones or earbuds to monitor your recordings as you make them. Many people will know what you’re up to. Often that’s not a problem, but in others it will be a better policy to keep the recorder out of sight and connect it to a pair of binaural mics or some other kind of headworn arrangement which isn’t too noticeable.

After the smoking ban in pubs everyone liked to remark how you could, for the first time, smell the toilets. With lockdown the streets are now so quiet that you can properly hear all the air conditioning units at work. The other day I went to try out the D100 in Cambridge city centre. In normal times the narrow pavements are packed full of shoppers, students and tourists. A recording made at the junction of a passageway and a small back street gives some idea of how well suited the D100 is to quiet environments.

Two cyclists talk as they come down the passageway towards the recording point before turning left close by, there’s a constant aircon hum from some university building, birds sing and the bells of different colleges and churches strike the hour. Self-noise is low, and the stereo image feels open with quite good localisation of sound sources. I feel the lower frequencies could do with a bit more oomph but this is a personal thing, and may be a positive feature if you want to downplay the presence of traffic.

What was happening in that environment was pretty straightforward. During a later outing the recorder didn’t do so well in the complex environment of Cambridge Market. Sitting on the edge of the old fountain in the middle of the market, I saw and heard all kinds of activity going on around me. Refuse collectors were banging and shifting bins behind me, to my right food was being fried on a griddle, ahead of me people were talking to the owner of a fruit-and-veg stall, to my left people were walking past.

I tried recording with the D100 facing two different ways, but neither effort yielded a very coherent stereo image and it didn’t seem worth uploading them to Soundcloud. Take my word for it! Too much seemed to be going on all around, a confusion. In many similar situations I’ve found that headworn and binaural-style mic arrays do much better in giving a compelling and realistic sound – the Street Life 2017 section here has dozens of street market recordings made that way.

Here is a constraint in using the D100. It seems best to have the most prominent audible action going on in front of you and perhaps to the sides, but not close by all around. The recorder makes you more a spectator of events than a participant, just as a camera often does.

The other mic position is with the capsules facing inwards towards each other. This should be better for isolating particular sound sources, as you might need to do during an outdoor vox pop or when making focused effects-stype recordings. It might also be usuable for indoor podcasts. Although you can’t speak into the D100 from too close (a pop filter might help), I found that at home it picked up very little reverberant tone in a room with a fitted carpet, drawn curtains and some hard surfaces covered with towels.

The second recording presented here is a comparison between the D100 and my homemade acoustic baffle with its two Sennheiser MKH 8020 omni mics and Sound Devices MixPre-D. It was made in an overgrown cemetery at around 4.45 in the morning when the air seemed to ripple like old glass with the dawn chorus.

The D100 occupies the first half of that recording. It doesn’t sound as refined or as natural as the Sennheiser setup, but I think it’s pretty decent and for much lower cost and weight.

I recommend the Sony PCM D100 recorder for its good sound quality, versatility and ease of use. It’s ideal for taking on holiday or on speculative recording trips where you don’t want to be weighed down with gear. This isn’t a comprehensive review so there’s no mention here of the recorder’s more advanced features. On Paul Virostek’s Creative Field Recording blog there’s a detailed write-up with several sample recordings to hear.

THE FIRST political demonstration I saw and heard was in London in the late 1960s. I was about three years old at the time.

It was a sunny day and I was out with my mum and dad in central London. They were small-c conservative and not very interested in politics so we would have been there for some other reason. From the pavement in a wide street, perhaps Piccadilly, we could see a crowd of people who were all walking in the same direction along the road, on the tarmac. This was surprising. You weren’t supposed to go on the road.

The people on the road were chanting “Ho! Ho! Ho Chi Minh!” I began to try to chant it as well. Later when we got home I chanted it again, making my mum and dad laugh.