This is a new section of the website, started in January 2018, in which I'm presenting transcribed and digitised out-of-copyright publications about street cries.

Street traders' cries often had a distinctive musical prosody, arising from the need for easy projection and repetition. Through them the traders could also stake out their place in the traditions of city life. London writers had described such vocal customs from at least the time of the early 15th-century satirical poem London Lickpenny and William Langland's Piers Plowman of the late 14th century. Street cries were worked into the early 17th-century musical compositions of Orlando Gibbons and Richard Dering. They reappeared in later popular and classical works, from broadsheet ballads to Vaughan Williams's A London Symphony, Lionel Bart's music for Oliver! and the Thames Television signature tune Salute to Thames with its flower girl's melody of "Who will buy my sweet violets?" 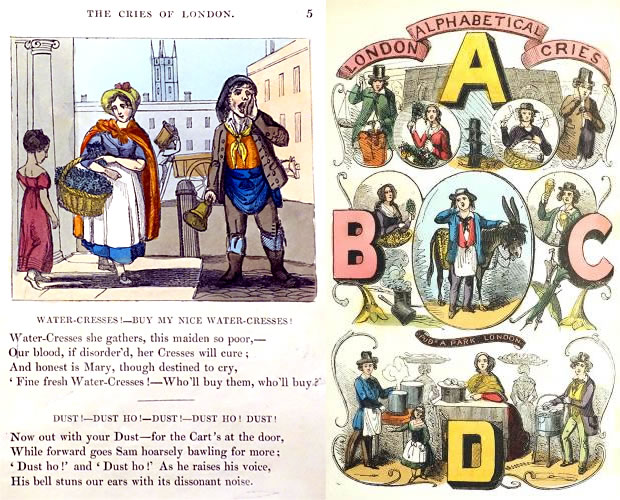 Most surviving books about street cries are from the 19th century. Those from the early to mid part of the century were usually cheaply-printed chapbooks meant for children, and in them traders could be presented as examples of the necessary ordering of society, reminiscent of the constructive roles projected onto animals in nature. Late 19th-century books, such as those by Andrew Tuer and Charles Hindley, more often sought the attention of adult readers by writing about street cries as a form of living local history.

In presenting the books, I'm not only scanning pictures but also transcribing the text where there's big swathes of it. This is time-consuming but makes it easier to read the books than if you had to zoom in and out of pages which had been scanned in their entirety. I've broken the books down into parts or sections where doing so aids readability and page load times.

As more books are gathered, it should be possible to start to identify particular themes worth exploring and commenting on. To begin exploring, simply select a book title from the column on the left and click on it to reveal its part or chapter links. Be sure to revisit often, as I plan on adding more books whenever possible.


Important note for parents and teachers

Many of the publications reproduced here can be used profitably in the classroom. Young children may enjoy learning and reciting the old street cries, or else might try inventing new ones for familiar modern-day goods. These books allow some lively insights into the history of everyday urban and domestic life.

However, parents and teachers may wish to be forewarned about those publications which are suffused with the prejudices of their times. A few express obvious racial animosity towards Jewish and Black people. The pattern goes roughly as follows: English books tend to be matter-of-fact or sympathetic in their depiction of Black beggars and characters about town, and are variously well-meaning, disinterested, patronising, or hostile towards Jewish street traders. With one exception, books from the United States don't mention Jews at all, and are variously well-meaning, condescending, or dismissive towards Black traders.

Exactly which books might best be treated with caution or avoided altogether will be a matter of opinion, so there seems little point in trying to provide a definitive list. Instead, if you intend drawing children's attention to this site section, or to any books in particular, then you may wish to check first. I've made it easy to cut and paste the text and pictures, so as an alternative they can be copied into a document or some other application.