THE CRIES OF PHILADELPHIA 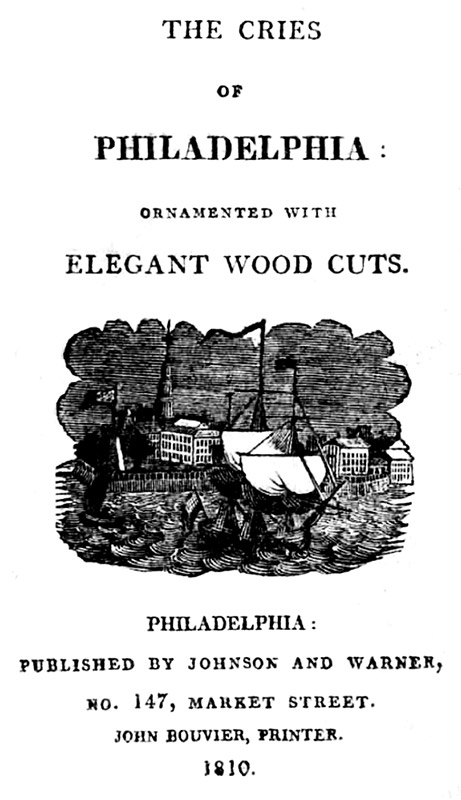 IS the metropolis of Pennsylvania, and the largest city in the United States The number of inhabitants, including the Liberties, are about 100,000.

It was founded by the great William Penn. The streets are generally wide, and cross each other at right angles, the houses are built chiefly of brick, are three stories high. The situation of the city is very favourable both for foreign and inland trade, lying on the west bank of the Delaware, and being the only port of entry in the important state of which it is the capital.

The manufactures of this place are numerous, the market for the supply of the people is not certainly excelled by any in the world. 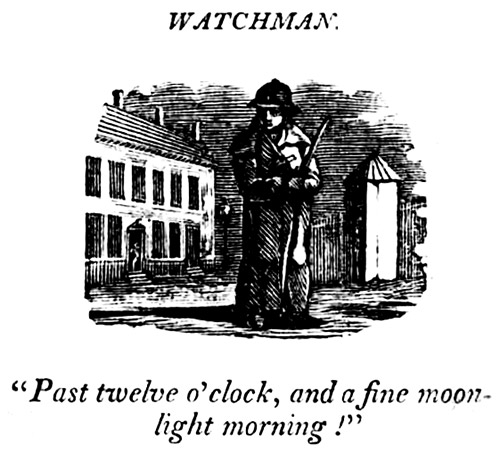 To preserve the city in safety from thieves and robbers, a number of men who are called watchmen, are appointed to travel the streets from ten o’clock at night till day light; thus the inhabitants repose in safety, while this useful class of people are guarding their property, and always prepared to sound an alarm of fire, in time to prevent much injury.

At many of the corners are small round boxes, called watch houses. In these boxes, our faithful guards resort for shelter from the rain, the snow, or the cold. This however is only allowed, after they have travelled over their ward or district several times. The first time they go round after the clock strikes, it is their duty to cry the time, and after midnight, also the sort of weather. At other times they pass along quietly, to look out for rogues or to quiet disorderly passengers.

For all this service, these useful men get only about 12 or 15 dollars a month, but expect a gift at Christmas and New Year’s day. They surely deserve it, and we hope all good citizens will remember them.

The cut is a good figure of a watchman, crying

“Past one o’clock and a cold frosty morning.” 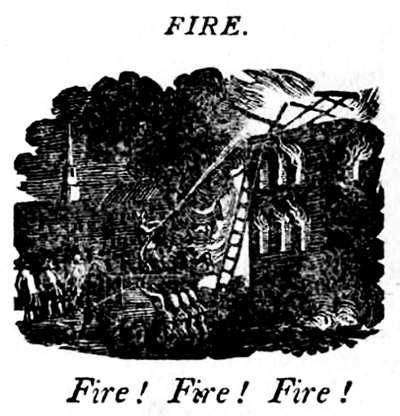 This is the most awful alarm heard in our streets, and when it happens in a dark and gloomy night, it is the more solemn.

When a fire is discovered in the night, the watchmen are the first to sound the alarm the bells in the different parts of the city increase the unpleasant news, and in a few minutes the general cry of fire! fire! leaves no one without the opportunity of doing some good.

Indeed on such occasions the people of all ranks assemble, and we often observe the most delicate persons making great exertions to serve those in distress.

The use of the hoase, applied to the conduits which convey the river water thru’ the streets, is a means of stopping the progress of fire, better than the engines, which are still used to advantage in conjunction with the other. The cut represents a house in flames, with the citizens engaged with their ladders, engines, &c.

We hope our little readers may not often hear the dismal cry of fire! fire! we would much rather lead them to a more pleasant feast. 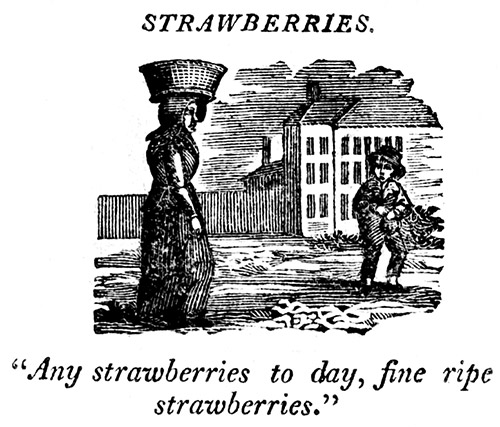 The strawberry is considered a most delicious fruit, and certainly a very wholesome one. It is the first fruit at market in the spring; is brought to the city in great quantities, and is sold very often for as low as 6 or 8 cents a quart; when they first come the price is 50 cents. The strawberry is a native of this country, tho’ not peculiar to it. Those taken from the fields are not so good as others cultivated in gardens. They are generally sold by women and young girls, who carry them about the streets, as represented in the cut. 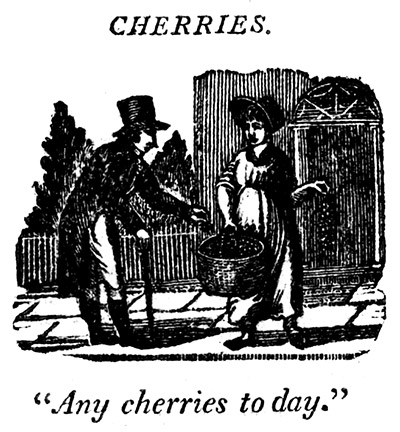 Cherries are carried from door to door, by women and children, crying as they pass along, “Black hearts,” “Red hearts,” “May dukes,” or whatever kind they may have for sale. In this way the people of the city are furnished, for a few cents, a feast upon a most delicious fruit. Children should however recollect, that the sweet black cherry is not so wholesome as others, and that they should never eat many of them at a time.

“The children are quite blithe and merry,
When summer brings the crimson cherry.
This season kindly then imparts
In maydukes and its sweet ox-hearts,
With common black, and red ones too,
And various kinds of lovely hue.” 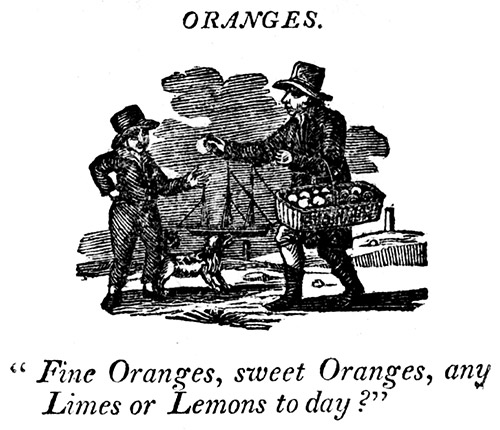 These fruits are brought from the West Indies, and sold in our streets as represented in the print. The orange is a delicious fruit, and is often used to advantage by the sick, the limes and lemons are employed to make a common beverage, called punch. This is a dangerous drink as people are apt to drink more of it than will leave them sober, thus making man more an object of pity than of love.

We would recommend our young readers to taste the orange, but leave the others to those who are older, and know their uses. 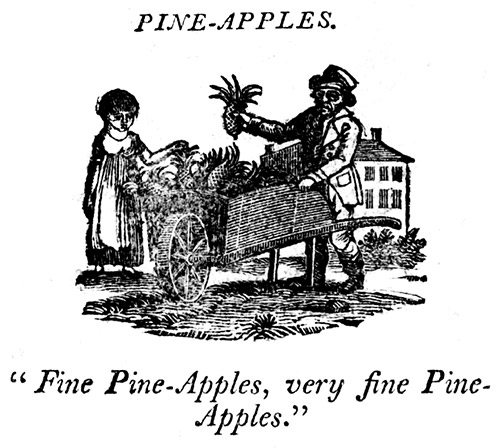 The pine-apple is very pleasant to the taste. Its smell very much resembles that of the strawberry. It is probable, that it took its name from a similarity in shapes, &c. to a cone, or kind of wooden fruit, which grows on the pine tree, which has been denominated pine-apple.

They are raised in warm countries, and are brought to this market from the West Indies. There grows but one apple at a time, on a root: they are propagated by planting the crown, or tuft of leaves, which grows on the top of the apple, or from suckers that shoot out under the apple. The common price is from 12 to 25 cents. 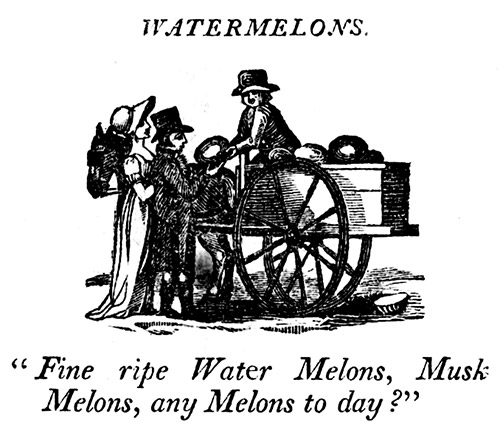 The melons brought to this market are from the state of New-Jersey, in which they grow in the greatest abundance.

They are considered, from their cooling qualities, to be very useful both to the sick and the healthy. They are sold so cheap, as to be within the reach of almost every person. 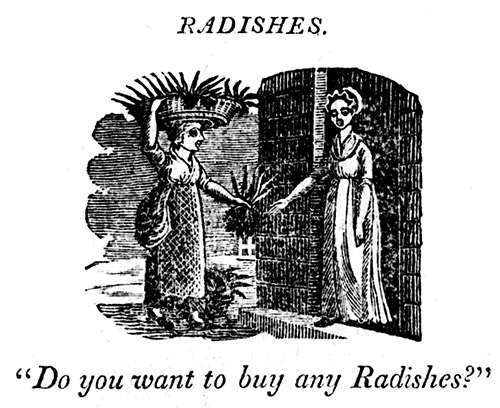 These little girls are busy, in different times of the day, with a basket on their arms or heads, calling from door to door, to see who will buy; and it is not to be doubted, but that many, exclusive of the desire for the radishes, are induced to purchase, in order to encourage the little ones in their laudable examples of application and industry. We are formed for labour; and it is not only an injunction laid upon, but an honour to us, to be found eating our bread by the sweat of our brows, and not spend out time to no profit, as Dr. Franklin, in a facetious manner, describes, in relating the observations of a Negro.

And now, I would ask my little friends, whether it is not more desirable and reputable, to be like the little girl in the picture, doing good, by being engaged in some useful employment, than like the gentleman-hog, only live to eat, drink, and sleep. 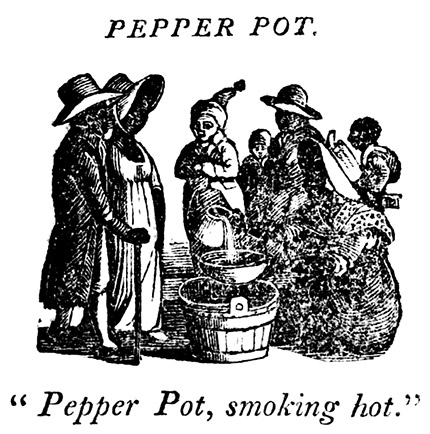 Strangers who visit the city, cannot but be amused with the cries of the numerous black women who sit in the market house and at the corners, selling a soup which they call pepperpot. It is made chiefly of tripe, ox-foot, and other cheap animal substances, with a great portion of spice. It is sold very cheap, so that a hungry man may get a hearty meal for a few cents. The print affords a good view of the group that often assemble around the tub, truly smoking hot, and excepting to weak stomachs, it is a very pleasant feast. 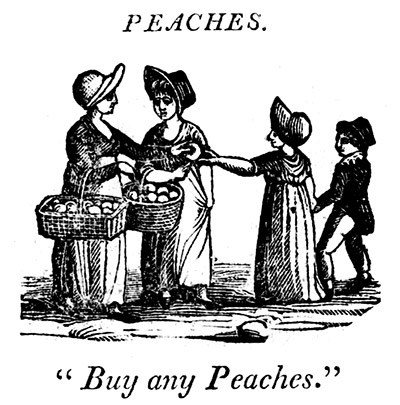 There is no cry in our streets more grateful to the ear than, “Do you want to buy any peaches.” When this most excellent fruit is in season, there are many young girls who pass along the streets offering to the people the most grateful feast which the fruit of our happy country affords.

The cultivation of the peach tree ought to be encouraged, and we hope, if the children of our farmers ever see this little book, that they will plant a number of the stones of their best peaches, in some spot which will be safe from the cattle. Four years from that time, they may expect to gather the fruit of their care, and what a pleasant reflection it must afford, and wish our young farmers all success. 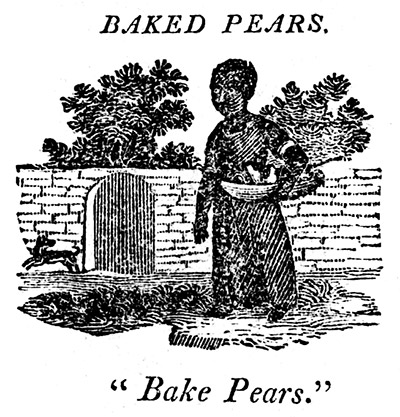 A little black girl, with pears in an earthen dish, under one arm, cries “bake pears.” They sell one, sometimes two or three for a cent. This too is an honest way to procure a living. It is much to be lamented, that any person, white or black, should be willing to live by means that are not honourable and honest.

In pears, as in some other kinds of fruit, there is a great variety in size and taste. Some are very pleasant to eat, and others are only fit for cooking, or to make into cyder, or perry, as it is called. The wood of the pear, as well as the apple tree, is of a solid and firm texture, and is frequently made use of to make buttons, and other articles, and when dry, is excellent fire-wood.