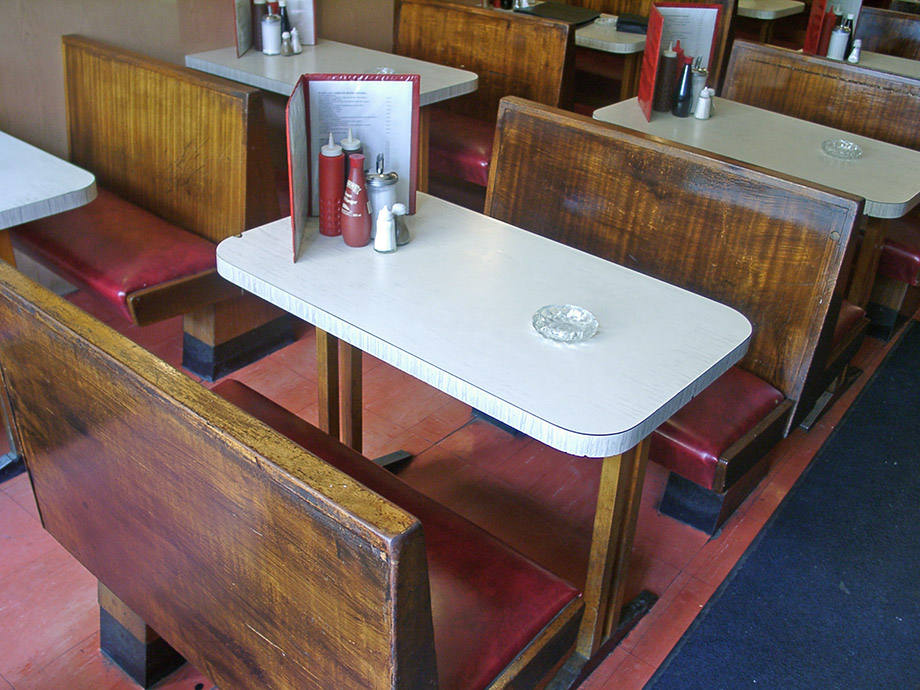 This section presents some photographs I took in 2001 of traditional-style London cafes. Scroll down the page for thumbnail links both to individual cafes of note and to other pages where more cafes are lumped together by district.

Some of the cafes were large, some tiny. Some were plain and spartan inside, others had a friendly clutter of pictures and ornaments. Many were run by Italians, some by Cypriots, a few by English people. Despite their differences they all tended to be cheap, unpretentious and independently-owned. The cafes often possessed that sense of being a part of their surroundings from having settled in over the decades. Their clientele included tradesmen, postmen, office clerks, young mums with their kids, pensioners, doleys on giro-day blow-outs: all sorts. I felt drawn to them because they were echoes of the scruffy, fascinating city I’d begun to explore as a child in the 1970s. Also, just pleasant places to pass the time of day in.

One I went to often in the early 1980s is a good enoough representative of some of these later survivors. Maria’s Cafe, also called the United, stood at the junction of Essex Road and Pickering Street in Islington. It was a few doors down from the greengrocers’ stalls at the end of Elder Walk. Maria was a cheerful Italian woman with strong-looking hands and forearms that had possibly been developed through wringing chickens’ necks in more rural surroundings. Her husband spent most of his time in the kitchen, handing out plates of food through a serving hatch.

They had three stocky sons who were all amateur boxers. Sometimes these lads hung around the cafe with their friends, proudly pointing out their names on the boxing match posters which were stuck to the walls or passing judgement on other contenders: “I’ve had him”. Maria and her husband served English fried breakfasts and some Italian dishes. My favourite was the lasagne, a portion being only a little smaller than an LBC house brick. Maria would sidle up to stand alongside me and grin. “You like?” she’d say. At the time I wasn’t sure if this was a question or a command, slow to recognise the maternal kindliness being offered to a streak-of-cabbage teenager. Different people now occupy the premises under a new name, the Angel Cafe.

Italian families like Maria’s have added a lot of small good things to the parts of London they’ve traditionally inhabited: cafes, restaurants, ice cream parlours, delicatessans. When I spoke to some of the cafe owners back in 2001, they explained that the tradition of running cafes was dwindling. Their children aspired to office jobs with better salaries and more reasonable hours. Instead the baton is being passed on to Cypriots, Turks and other people. English-run cafes were much rarer in central London than they were in the railway suburbs or further out. There was one in the 1980s close by Highbury & Islington station, and I remember several more around Hammersmith in the 1970s.

The Times Dining Rooms were on Shepherds Bush Road, a short distance north of the junction with Brook Green. Today it’s an affluent area but at the end of the 1970s it had the seedy, run-down feel common then to much of inner London. You can glimpse this in films like Withnail and I, episodes of The Sweeney and occasionally location shots in Steptoe and Son from the streets of Notting Hill and elsewhere in west London. I’d visit for a post-shopping treat after buying secondhand paperbacks in the nearby Popular Book Centre. A cup of stewed tea and slice of bread-and-marge complemented the works of James Herbert, Philip K. Dick, Michael Moorcock, and the Pan horror compilations that had on their covers a photo of a goat’s head surrounded by black candles, or a tarantula crawling across a baby-faced Victorian doll.

Everything inside the Times Dining Rooms – walls, furniture, people, food – seemed to be covered with a thin yellowish film, probably a combination of nicotine and the greasy hydrocarbons exhaled by the cafe’s gas stove. Next to the counter hung a long strip of fly-paper with its harvest of captives, either dead or wriggling their way down the spectrum of exhaustion like unhygienic clockwork toys. It brought to mind the expression ‘flies’ graveyard’, a humorous term for spotted dick pudding, which, coincidentally or not, was on the menu. The proprietor was a man in a grey warehouse coat who spoke little.

Several of his regular customers were older men of a type you don’t see any more. They tended to be thin and pale, and respectable in appearance if seen from a distance. Closer examination revealed grimy shirt collars, trousers that were a little too short, stained ‘Lord Antony’ anoraks or raincoats worn even in dry, warm weather. Sometimes I had seen one or two of these men in the Popular Book Centre, where the shopkeeper would usher them through a doorway at the back of the shop. What lay beyond was an unseen and esoteric realm, as the doorway had a hanging curtain of multicoloured plastic strips which blocked the view. I once tried to approach it but the shopkeeper moved quickly in front of me. “No, invited customers only,” he said.

Cafes were bound up in the activities of their surroundings, minor emblems of a plebeian London of cavernous pubs, street markets, army surplus stores, bingo halls, dog tracks, hoardings lacquered with gig posters, junk shops with their old fridges and sofas on the pavements outside. This world was not representative of the city as a whole but it was a significant part and many people had an understanding of it. London now seems harder to know because it has become much more cosmopolitan and because wealth and modernity bring with them private ways of life. Perhaps this is why many blogs and websites about London concentrate on its past, on impersonal unifying symbols, or buildings, places and other containers for people instead of the people themselves.

The pictures presented here are now sixteen years old. Some of the cafes have survived, others have changed hands and names since then, many have disappeared altogether. To those running them who gave me a little of their time, my thanks. Better late than never.