This is the original edition of ‘London Cries for Children’ published in London around 1806. After printing, its illustrations were hand-coloured in a crude and hasty-looking way. Perhaps the task was carried out as piece-work for a very low rate. An 1810 edition of this book with black-and-white illustrations was published by Johnson & Warner in Philadelphia and is included in Street Cries of the World starting on this webpage. 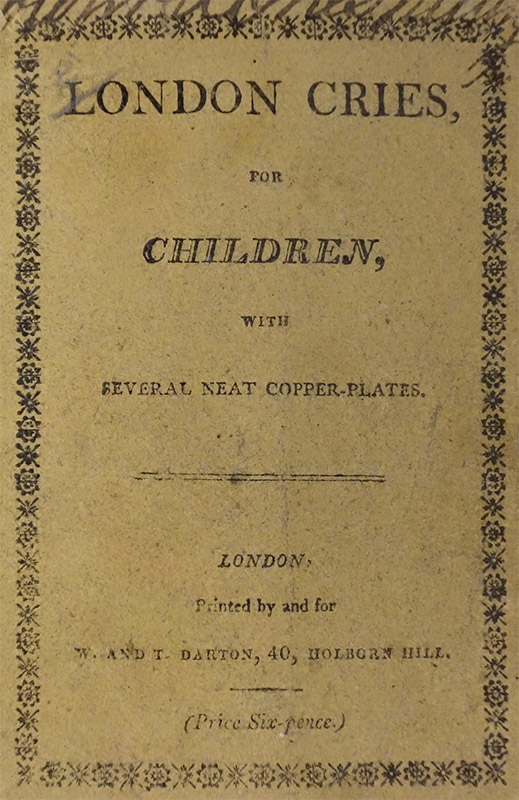 No Cries are sure of such renown,
As those of famous London town. 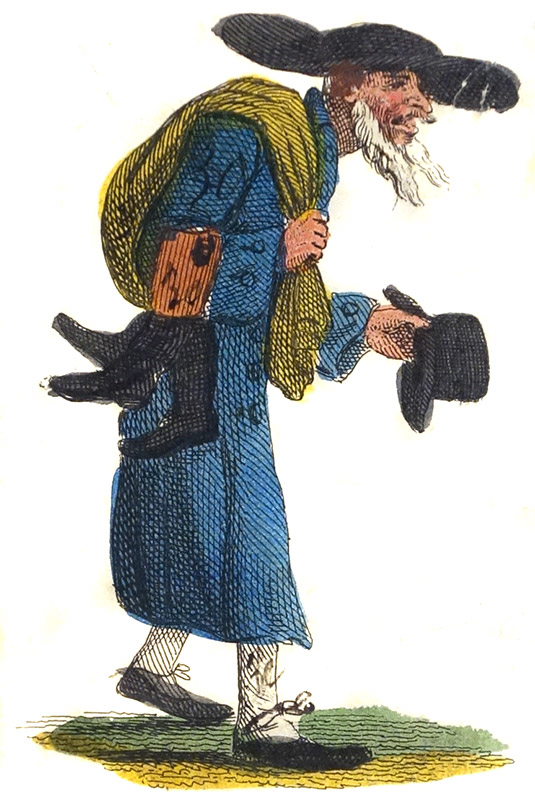 Old shoes! Old hats! come little dear,
To hear me cry you need not fear;
There’s difference great between us two,
I always cry but seldom you,
And you cry tears I should suppose,
While I cry nothing but old Cloaths. 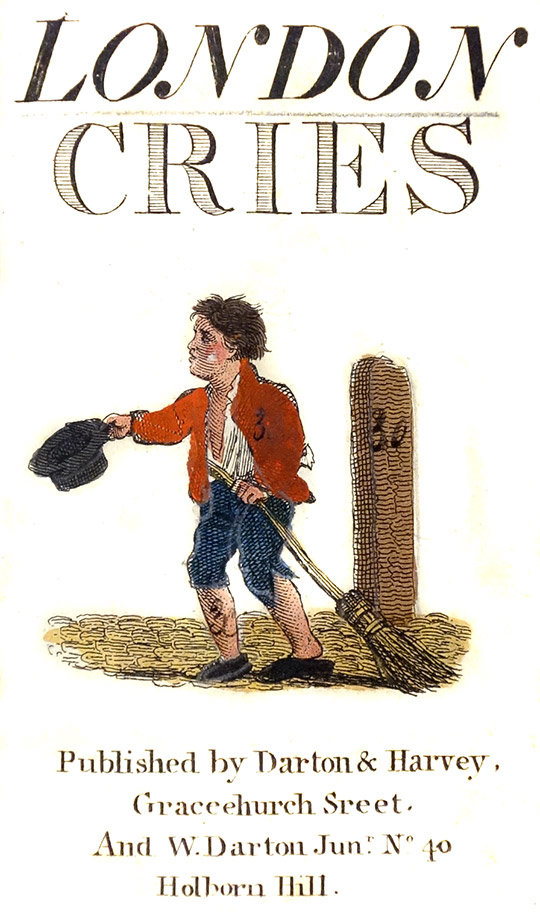 These radishes, so fair and round,
To please the palate will be found;
Fourteen a penny is the price,
You’ll surely buy, they are so nice.
Try with a few good radishes,
How bread and butter relishes.

THE seed of the radish is small, but of considerable use for the health of man; much attention is paid to the culture of this very useful root. – I wish you to take a delight in cultivating a garden; there will be found in this employ real usefulness, instruction, and health. Many of the inhabitants of large cities are strangers to employments in rural life; remember you are placed in a spacious and well-furnished world, and that Providence has provided man with materials whereon to employ his art and strength; and has given him an excellent instrument, the hand, accommodated to make use of them all; and has distinguished the earth into hills, valleys, plains, meadows, and woods; all these parts capable of culture and improvement by his industry; and has committed to him for his assistance, in his labours of ploughing, carrying, drawing, and travel, the laborious ox, the patient ass, and the strong and serviceable horse; has also created a multitude of seeds for him, of what is most pleasant to taste, and of most wholesome and plentiful nourishment; and has likewise made a great variety of trees, bearing fruit both for food and physic, those too capable of being meliorated and improved by transplantation, pruning, watering, and other arts and devices; therefore the bountiful and gracious Author of man’s being and faculties, delights in the beauty of his creation, and is well pleased with the industry of man, in adorning the earth with beautiful cities, pleasant villages, with regular gardens, orchards, and plantations of all sorts of shrubs, herbs, and fruits, for meat, medicine, or moderate delight. 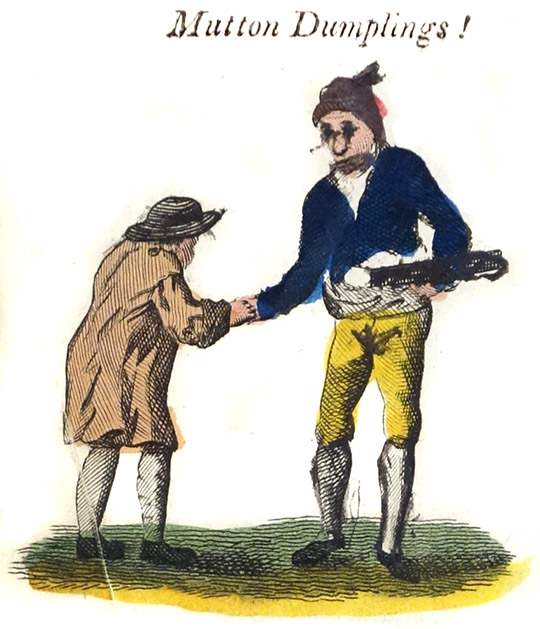 Nice mutton dumplings! smoking hot,
And just brought boiling from the pot:
Take my word, they are very good;
Besides, they make substantial food.
Consider now the price of meat,
And you’ll say they are also cheap. 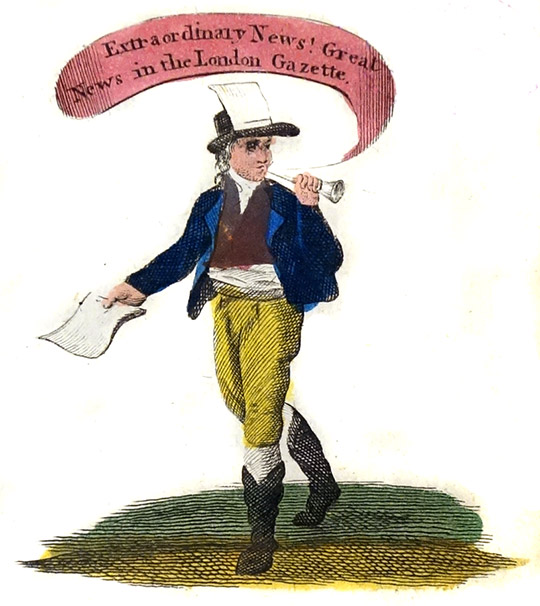 In the Gazette GREAT NEWS to day,
The enemy is beat, they say. –
But, what, alas! will that avail?
Since war we still have to bewail.
Yet all are eager to be told
The news that new events unfold.

NEWSPAPERS are much read and expeditiously circulated through all parts of Great Britain; each pay a duty to the government before they are used by the public, which produces great sums of money: if the produce of the numerous taxes which abound in England were always suitably applied, there surely would not be an occasion of laying so many new ones on the industry of the inhabitants; nothing tends so much to reduce to poverty and misery the people of any country as the continuance of long and obstinate wars: always remember, this is one of the greatest evils with which mankind can be afflicted. – A disposition to be at peace and friendship with all mankind, cannot fail to be productive of every benefit and happiness in an individual as well as in a national capacity. 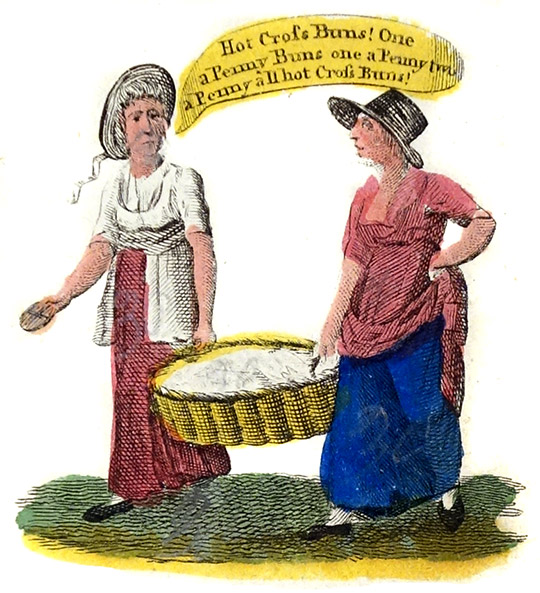 Little folks will lend an ear
When this pair approaches near;
Their buns are found so very nice,
They are always eager for a slice,
But if flour should rise anew,
To hot-cross buns we bid adieu.

ONE of the most noted cries of London was of the famous pig-man of whom there is a portrait extant; and who has had the honour of being imitated by several successors: his cry was:

The pigs were three or four inches long, composed of what is called standing crust; baked with currant sauce in the belly.

Upwards of forty years since, a miserable wretch perambulated this metropolis, to purchase, “Shreds and Patches,” whose cry was,

Linen, woollen and leather,
Bring ‘em all out together.

A singular cry of an equestrian is recollected to have been heard between thirty and forty years since; a rustic, mounted on a white hobby, with a basket on one arm, used to invade the north purlieus of London, mumbling “HOLLOWAY CHEESECAKES!” which from his mode of utterance, sounded like, All my teeth ache! There was also a noted vender of gingerbread, at Bartholomew, Southwark, and other fairs, about the period already adverted to; he was called Tiddy Doll, because, to collect his customers around his basket, he used to chaunt a song, in which scarcely any thing was articulated, but the cant expression, “TIDDY DOLL,” he used to wear a high cock’d hat & feather, with a broad scollop’d gold lace on it; and had the honour, like the pig-man, of being imitated by succeeding venders of gingerbread. 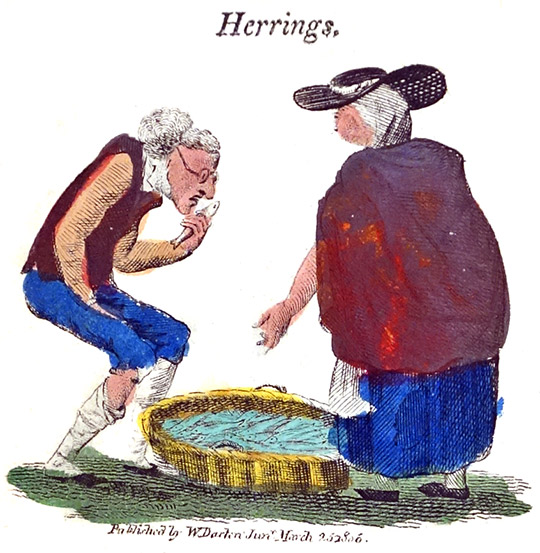 Alive and fresh, good herrings oh!
Six a groat, is cheap, you know.
Off Britain’s coast they late were caught,
And in a ship but just now brought.
If Mrs. Cook will dress them well,
Of their goodness you will tell;
Or if, to salt them you’re inclin’d,
There’s not a doubt they’ll suit your mind. 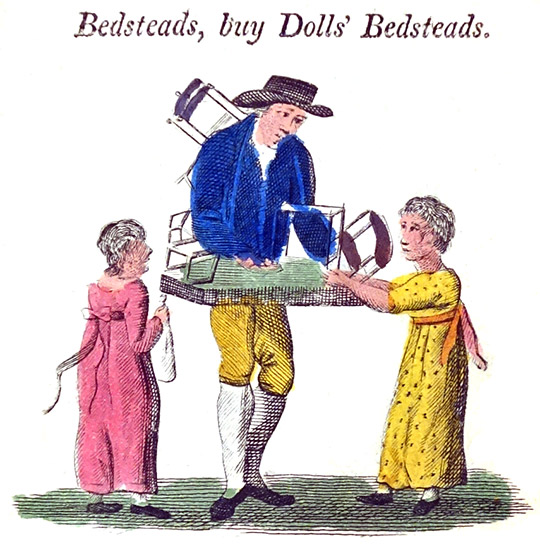 Here little girls will doubtless find
What cannot fail to please their mind;
Bedsteads of every size the best,
On which their painted dolls may rest:
And ‘tis but right that you should grant,
What you yourself so often want.

THIS is not a very frequent London cry, there is only one man I ever heard call “DOLLS’ BEDSTEADS,” he is now I believe often to be seen and heard in various parts of the town. London has produced some very strange characters under the description of London Cries; Jeffery Dunstan, who was living a few years back, was one of the most eccentric in his person and cry; many of these sort of people have met with much more notice and encouragement, than perhaps their way of living merited. Those who are amiable and useful should always be preferred to an opposite character.

There are several well executed engravings of Jeffery Dunstan; he excited considerable curiosity when living, his figure was ugly and deformed, and his intemperance in drinking rendered him absolutely a brute, and ultimately caused his death. 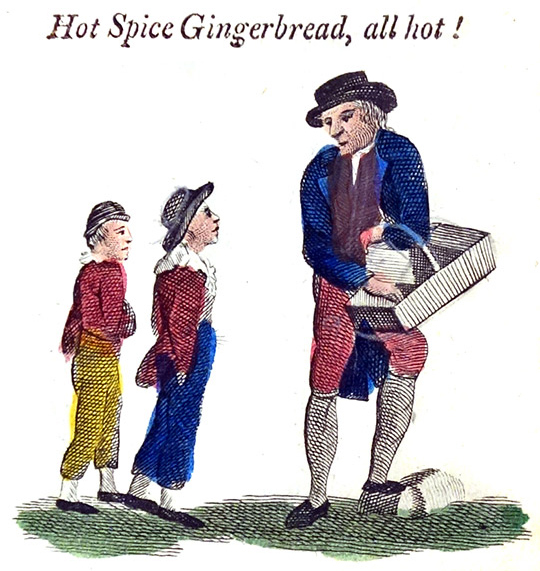 Here is spice-cake for those good boys,
Who better love their books than toys;
And little girls may have their share,
As often as they sew with care:
Here he comes! his basket smoaks;
BUY SOME SPICE, good little folks.

A FEW years since, there was a blind man who constantly sat at the corner of Chiswell Street, Moorfields, at the time when the ground on which Finsbury Square is now built was open fields, whose loud and singular voice was heard by many at a great distance; he could readily distinguish between good and bad halfpence directly he felt them, and has been frequently heard to say to little boys when they have offered him bad money, “THAT WON’T DO” – “THAT’S NOT A GOOD ONE.” Thus poor Jemmy would as easily detect and as readily refuse bad money, though quite blind, as many persons who have the use of their sight, the coldest night in winter did not prevent his regular appearance in his accustomed seat; he has now altogether disappeared, I suppose him to be deceased, or perhaps the new inhabitants of the square have disapproved of his presence, as they have now constantly in their employ a man walking round their dwellings to keep away characters similar to poor Jemmy.

*“HOT SPICED GINGERBREAD, sold in oblong flat cakes of one halfpenny each, very well made, well baked, and kept extremely hot, is a very pleasing regale to the pedestrians of London in cold and gloomy evenings. This cheap luxury is only to be obtained in winter; and when that dreary season is displaced by the long light days of summer, a well known retailer of hot spiced gingerbread takes his usual stand near the portico of the Pantheon with a basket of Banbury and other cakes.” 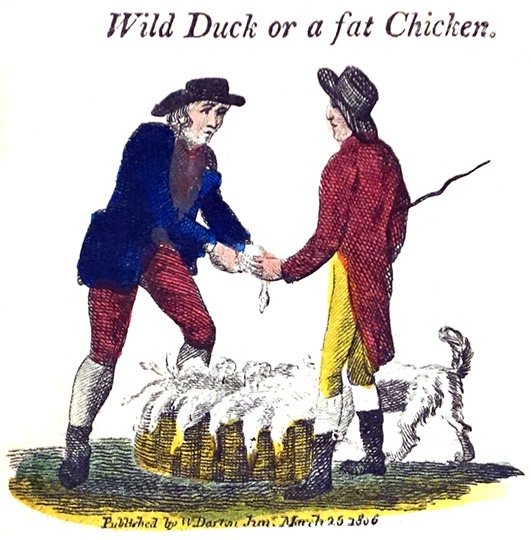 My game are round and fat you see,
If on the price we can agree:
These ducks but one day since were shot,
And suit alike the spit or pot.
Or if for game you’re not inclin’d,
Here is a chicken to your mind.