How to get in touch

It's always good to hear from fellow recordists, enthusiasts and scholars. Please send your email to

. For quick messages, please use the guestbook, revived in a more spam-resistant guise in October 2019.

Copyright applies to all the recordings on the London Sound Survey's website. Modern-day recordings, defined as those made since the year 2000, are also covered by a Creative Commons Attribution-NonCommercial 4.0 International Public License. This allows other people to re-use those recordings according to clearly defined conditions. The full definition of the license is given on this webpage. If you want to use any of the modern-day recordings, then you should first visit that link and read carefully.

Second, the non-commercial part of the license means you can't use the recordings for any purpose where you're seeking to make a profit or expecting to be paid. Please don't disregard that rule!

Projects which have used my recordings include non-commercial scientific research, educational resources, freely-distributed music and podcasts, and much else. Do drop me a line and let me know if you too find a good use for them.

Creative Commons does not apply to any of the old BBC recordings which appear in the Radio actuality recordings section. I've spent a lot of time researching, digitising and restoring those recordings, but the BBC nonetheless owns the copyright.

The idea for the London Sound Survey formed while I was working as a storeman in what used to be called the National Sound Archive. The website's name is a hybrid of that and A Survey of London, the book written by John Stow in 1598. The historical aspects of sound can be as interesting as its present-day manifestations, sometimes more so.

I made my first London recordings in April 2008 and the site went online just over a year later. Since then it's grown from about 200 recordings to over 2,000 and progressed from a hobby almost to a full-time vocation. Alongside my own efforts I've been pleased to feature work by Richard Beard, Andre Louis, Stuart Fisher, Felicity Ford, Jonathan Prior and others.

The London Sound Survey receives no funding other than what comes out of my pocket. I left the Archive in 2014 and now work elsewhere.

The London Sound Survey has been featured on Radio 4, BBC Radios London and Essex, World Service, Resonance FM, and BBC1 London news. Sounds from the site have also been used in audiobooks released by BBC Worldwide. The project once got some favourable coverage on the Daily Mail's website, causing a huge if brief visitor surge, and my recordings were also used in a Guardian interactive feature about the Shard skyscraper.

Below is a recording of me addressing the nation for a few minutes on Radio 4's The Today Program in June 2016:

A nice use of the some of the recordings is their inclusion in Sound and Music's Minute of Listening project, which consists of media packs sent out to primary schools. Kids listen to the sounds and are asked to think about and discuss them.

A small number of articles in academic journals have cited the London Sound Survey in their references, and it also receives mention in several books, including The Routledge Handbook of Mapping and Cartography (eds. Alexander J. Kent and Peter Vujakovic), Identity and Intercultural Exchange in Travel and Tourism (ed. Anthony Baker), The Impact of History? Histories at the Beginning of the 21st Century (Pedro Ramos Pinto and Bertrand Taithe), Music and Technologies (eds. Darius Kusinskas and Georg Kennaway), Developments in the Theory and Practice of Cybercartography (eds. D.R.F. Taylor and Tracey Lauriault), and In the Field: The Art of Field Recording (eds. Cathy Lane and Angus Carlyle).

It was listed in Time Out's 2012 edition of Things to do in London and in Adele Emm's Researching for the Media: Television, Radio and Journalism. In 2013, Vittelli Records released a vinyl LP of London Sound Survey recordings titled These are the good times.

A recording made of Tower Bridge being lifted was included in the Fermata art show in Washington, USA, and more Tower Bridge recordings inspired and were worked into a musical composition by Iain Chambers which, in a neat cyclical way, was performed inside the bridge itself.

In late 2016 I self-published the book Honk, Conk and Squacket, subtitled Fabulous and Forgotten Sound-words from a Vanished Age of Listening. It got a plug on Radio 4's Today program so it sold quite well online with around a thousand copies going in just under a year. I have a few dozen copies left, so you can still buy a copy.

The first proper recording I made was of Petticoat Lane on a Sunday morning. The technique used didn't allow me to listen as I recorded, so I had to wait until I got home to discover how it had turned out. The feeling of excitement at hearing the outside world's vitality brought indoors is one which has diminished only slightly over time.

Pleasure and curiosity have been the most reliable motivators, more so than a desire to 'document' the city, which just sounds pompous. It's my way of capturing fragments of everyday experience so that they can be reproduced in the minds of others.

Copies of the site's recordings are now being lodged with the London Metropolitan Archives for long-term safekeeping, and so it may be that someone decades hence will come across them.

To that future listener, greetings. 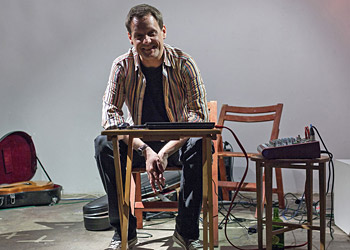 On stage at the 100 Years Gallery in London. 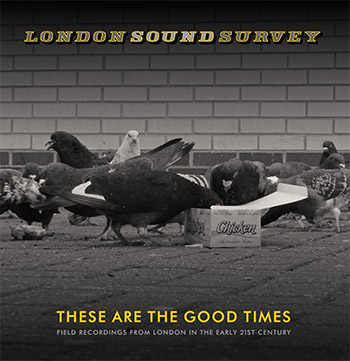 'These are the good times' vinyl LP. 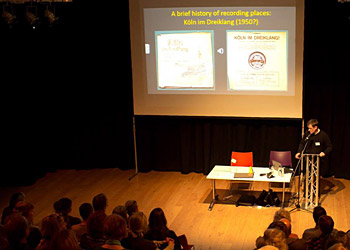 Presentation at a conference in Winchester. 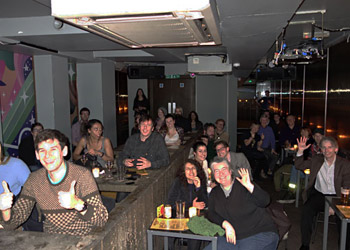 Audience at a talk in The Social, near Oxford Circus. 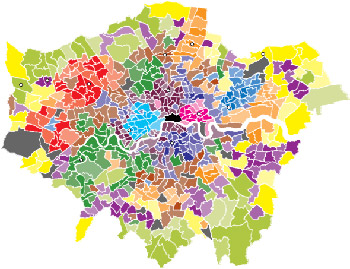 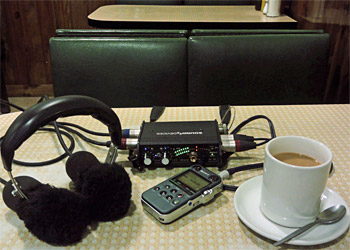