THE PROCTER & GAMBLE factory is in Thurrock on the Essex side of the Thames estuary. The easiest way to get there is to walk south from Grays train station to the Thames path and then head west for about a mile and a half.

Along the way are modern low-rise flats, a weatherboard-clad pub called The Wharf, and municipal gardens overlooking the estuary. Here and there a lone man occupies a bench watching the container ships pass by. The residential part ends and a large fenced-in industrial site appears, mostly levelled as if waiting for a new use and scattered with shipping containers and portakabins. Across the water is the Swanscombe peninsula on which no-one lives except for those occupying a few house-boats hauled up onto the muddy banks of Broadness Creek.

An overgrown, disused wharf lies next to a jetty. A gap in between bushes shows a rough trail to the water's edge. From here a good view can be had up and down the estuary. Water clatters from the opening of a broad pipe set in the bank below the flood wall. It feels like a secret place. On the ground are cigarette ends, an empty tobacco pouch, a Tyskie beer can stamped flat.

The Procter & Gamble factory can now be seen further to the west. It has grey metal silos and complicated-looking pipework set in front of boxy structures covered in coral pink cladding. Just before it, a second jetty carries oil or gas pipes pipes out into the Thames. A tall concrete fence topped with wire strands marks the apparent extent of Procter & Gamble territory.

The factory selectively looks good and sounds impressive from different angles. The above photo was taken where the recording on this page was made: on the Thames path alongside the factory's fence. The relentless clockwork duty-cycle of industrial noise seems unvarying but it does change. That sound like the regular release of breath from a giant maw, itself opening into oblivion, is present on some days and not others.

The fence runs for a little more than a quarter of a mile before it turns a corner. The path is now bounded by a wall four or five feet high beyond which is a small abandoned park. An entrance point has been blocked on purpose with boulder-sized concrete lumps that have to be scrambled over to get inside. Next to the entrance is a notice board which has turned into a canvas for grafitti-sprayers.

There is a lot of grafitti along the estuary. Lengths of wall become filled with bulging, writhing coloured forms like jungle blooms competing for attention instead of sunlight. Large tags are overpainted with smaller tags, and within the smaller tags yet smaller ones are scribbled in marker pen. 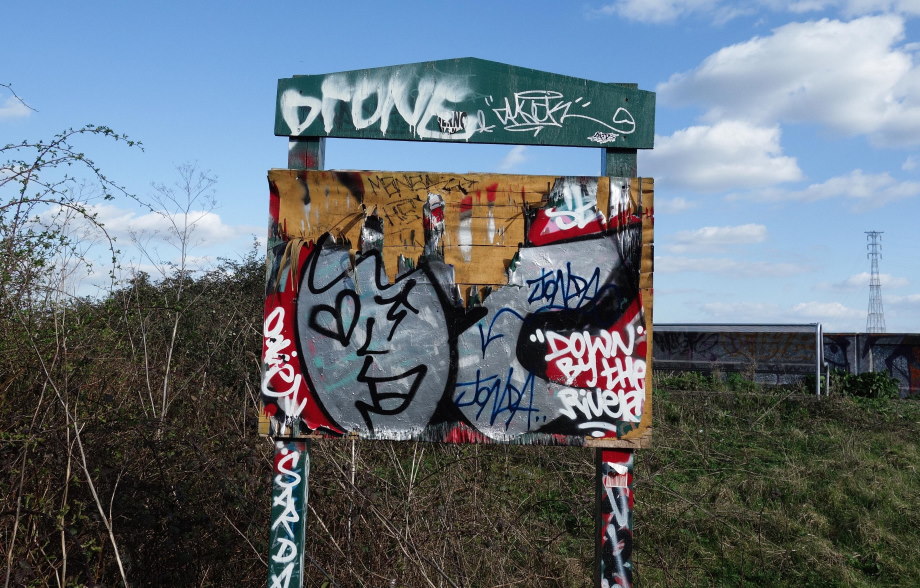 A path goes northwards through the park and emerges onto a well-maintained road leading to the factory complex. Ahead is St Clements church with its country graveyard and fifteenth-century tower. The contrast between the church and the huge industrial buildings flanking it on two sides is so surprising that it makes it seem like the church has been transplanted there from somewhere else, like the old London Bridge being sold and moved to America.

The Procter & Gamble factory makes soap and detergents for the British market. It replaces an earlier soap factory named Hedley's, which was built on the site between 1939 and 1940. The name survives in Hedley Avenue extending around most of the modern buildings. A sign next to St Clements explains that the church fell into disuse in the late 1970s, with Procter & Gamble taking charge of its restoration a few years later. 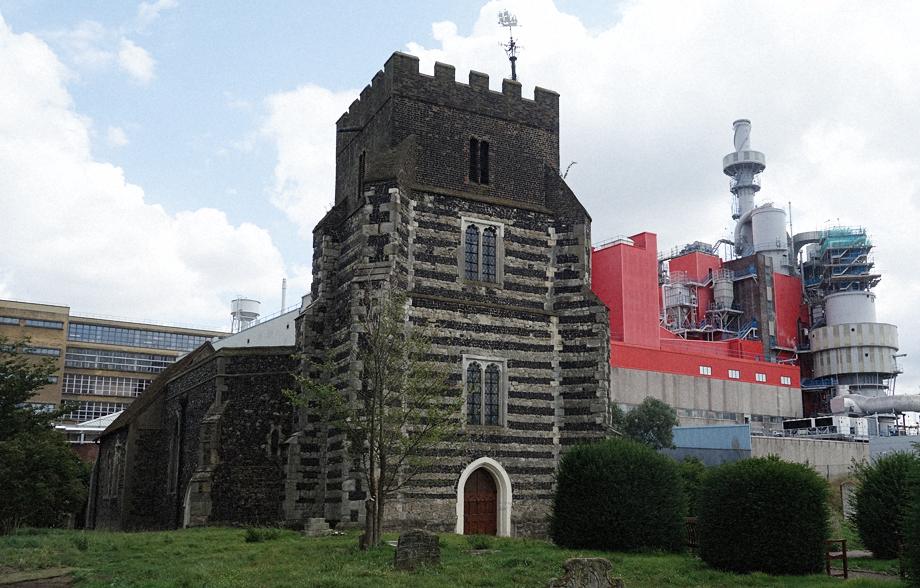 The church gives its name to St Clements Reach, a mile-and-a-half length of the estuary. Both that and the church are shown in the First Series Ordnance Survey map from the beginning of the nineteenth century. St Clements looks isolated among the marshes and, at its founding, was around half a mile from the nearest settlement. Perhaps it was built to serve pilgrims travelling to and from Canterbury via an ancient ferry between Stone Ness on the Essex shore and Greenhithe in Kent. 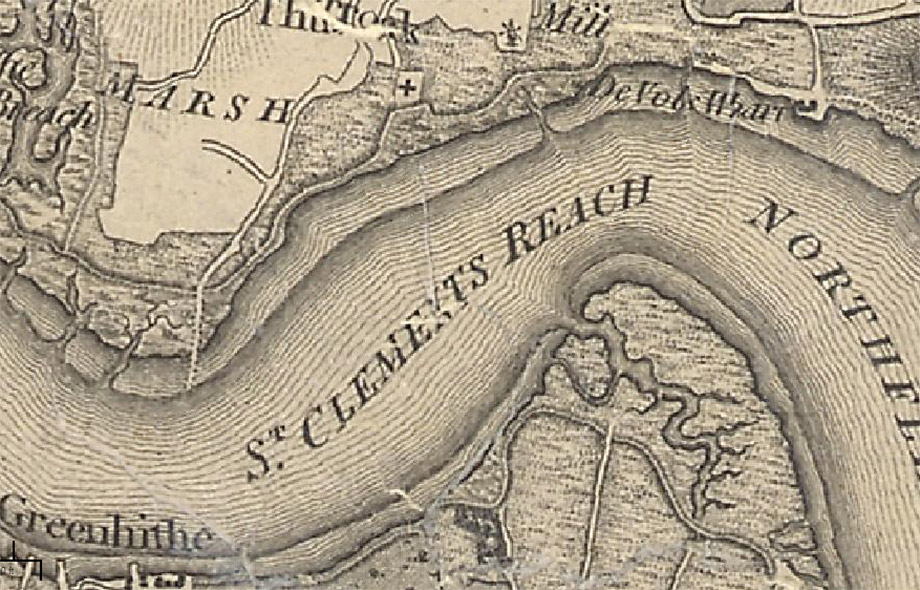