AN EMAIL ARRIVES from Vital Arts, a charity associated with Barts hospital and the London NHS Trust. They commission music and art for hospitals to act as a form of complementary medicine and they’re looking for sound artists to get involved with a new project.

Not being a sound artist and having no experience of installations there’s not a lot I can contribute to this. But anyone with the experience and sense of responsibility needed for such work might want to get in touch with Vital Arts through their website.

Healing sounds are more commonly relegated to the modest therapeutic goals of relaxation CDs or the drippy Enya-type music sometimes laid on by non-NHS dentists. I got that and liquid Temazepam to drink when I last had a wisdom tooth pulled out. The effects of both music and drug went together eerily well.

Last week some newspapers reported the revival of a much older and non-Western tradition of medicinal music. The Metro carried a story about two doctors at Istanbul’s Memorial hospital using classical Turkish and Arabic music originally composed to help sick people get better.

There was a longer piece in the Guardian with some linked audio files of the music and this picture of the doctor-musicians Erol Can and Bingur Sönmez at work: 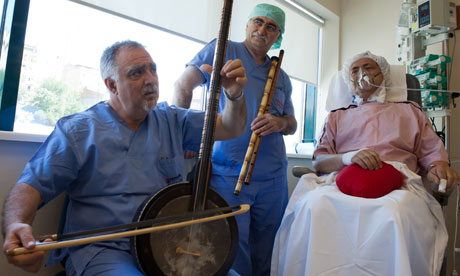 For more on classical Islamic music therapy, the Turkish Music Portal has this article. There’s an engaging list of some of the different musical modes or makams and the ailments they’re meant to relieve:

The specificity of the effects seems doubtful, although few could disagree with what the 11th-century philosopher Ibn Sina defined as a good healing environment:

“One of the best and most effective of treatments is to strengthen the mental and spiritual strengths of the patient, to give him more courage to fight illness, create a loving, pleasant environment for the patient, play the best music for him and surround him with people that he loves.”

It’s a nice exception to Betrand Russell’s claim that, in the absence of modern medical knowledge, people always default to doing unpleasant things to the sick and the mad.