THE SATIRICAL early 15th-century poem ‘London Lickpenny’ has now been added to the Street Cries of the World library. It’s not the only place on the internet where you can read the text, but it is the only one to date where you can see the original handwritten manuscript. 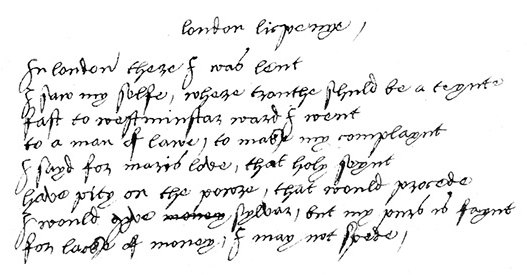 London Lickpenny was written around 1410 and it describes how a poor Kentish countryman visits London to settle a legal claim. He begins at Westminster with the Court of King’s Bench, before moving onto the Court of Common Pleas and then the Court of Chancery. But without money he’s unable to obtain justice.

He leaves Westminster and walks eastwards to the City of London. On all sides merchants and pedlars raise their cries for food, drink and goods. These are the oldest explicit references to London street cries in literature. William Langland’s allegorical Piers Plowman, written in the late 14th century, also mentions street cries in its prologue but as part of a nameless dream location.

The philologist William Skeat, in his 1871 Specimens of English Literature, confirms that the ‘Lickpenny’ of the title is an epithet for London itself, somewhere that greedily licks up your pennies like a cat at its saucer of milk. The man of Kent discovers how different the city is from home. At every turn Londoners want to sell you something, and that’s the only reason they want to talk to you. Everything is a commodity, even the recognition of what’s true and just.

In Kent the market is bounded. It happens in a particular place, perhaps one day a week or less frequently than that. In London there are no such limitations. The market is everywhere and it’s a foretaste of our own world.