YOU’VE HAD YOUR handy little digital recorder for a while now, and you’ve already moved beyond its internal mics to using an inexpensive set of binaural mics. Practice has revealed how they’re good for some situations and not others.

The next step might be a single-point stereo mic such as the Audio Technica BP4025 or a pair of Rode NT-55s with omnidirectional capsules.

Professional-quality condenser mics like those typically need 48 volts of phantom power to work and their leads have chunky XLR connectors at the ends. A new recorder is on the cards.

It’d be nice if that recorder left change from £400 or less, and had half-decent mic preamps. Even better if it could be shoved into a coat pocket and had internal mics of its own, just to allow for greater flexibility of use.

Two manufacturers, Zoom and Marantz, identified possible markets for such a device several years ago. Marantz launched the PMD-660 in 2005 and Zoom followed with its H4 Handy Recorder in 2006.

Neither recorder was blessed with particularly good mic pre-amps, and the Zoom H4 was widely criticised for its cheap build quality. Revamped versions of both, the PMD-661 and the Zoom H4n, were put on the market in 2009.

During the same year Tascam muscled in on the compact XLR recorder scene with its butch-looking DR-100. This autumn two other recorders have come along: the more svelte Tascam DR-40 and the R-26 from Roland.

In total, five different makes and models are now available for examination, arguing about on forums, and purchase. Four are really aimed at musicians, with the more sober-looking Marantz PMD-661 targeting the expenses accounts of journalists. This post provides a brief overview and comparison.

When it was launched in 2009, the Zoom H4n offered an alluring range of features for its low price. It allowed four-channel recording and was the first compact XLR recorder to be compatible with mid-side microphones and arrays. The Zoom website claims that this is ‘only found on the H4n’ but that’s no longer true.

It comes bundled with several cheap but useful accessories which other manufacturers don’t always provide, including a foam windshield, a case, an AC adapter, and a 1GB SD card.

Internal mics: 2 x cardioids set in a coincident X-Y pattern, with an angle of convergence that can be set at either 90° or, for a wider stereo image, 120°.

The PMD-661 has fewer features than any other recorder. It has only two channels, and no plug-in power or input for external electret-type mics. There are two internal mics, but their position is fixed.

What the PMD-661 does offer is a pair of good quality, low-noise mic preamps and the kind of subdued appearance which makes it suitable for journalism and interviews. Most of the other recorders here look like they’re for administering electric shocks. 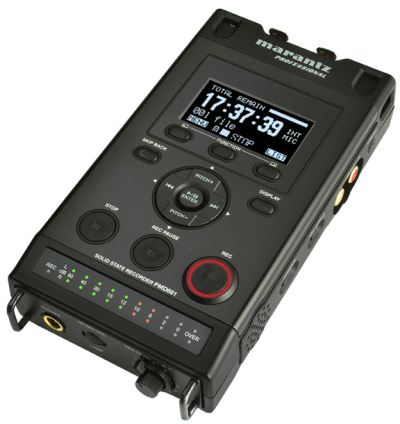 The Tascam DR-100’s marketing video showed it being left carelessly on a beach to emphasise its ruggedness, presumably a sideswipe at Zoom’s reputation for making things from thin, creaking plastic.

The DR-100 has two sets of mics, one cardioid and one omnidirectional, but only two channels, so they can’t be mixed. The sales bumph mentions the ‘high-performance microphone preamp with 60dB of gain’.

Mics: 2 x cardioid, 2 x omni. Their use is switchable, but they can’t be used simultaneously and mixed.

Special features: Comes with a remote control that can be used in either wired or wireless mode.

The DR-40 seems to be a renewed attempt by Tascam to compete with the Zoom H4n. It matches many of the Zoom’s features closely, with the notable exception of not providing an input suitable for external electret mics.

The DR-40 has four channels, allowing you to mix signals from its two internal mics with those from external phantom-powered mics. It’s the lightest machine of all five and, by a tiny margin, the least bulky.

Mics: 2 x cardioid, adjustable to X-Y (though not quite coincident) and AB positions.

Anyone who’s used the Edirol R09-HR will expect good sound quality from its new and bigger sibling the R-26.

It’s not the heaviest but it is the bulkiest. That’s not surprising given how Roland have tried to cram inside just about all the functions offered by every other recorder, and then added two extra channels on top, making six in all.

The Roland R-26 offers the most extensive feature set of all the machines described. According to Raimund Specht, who posts on the naturerecordists email list, the R-26 has a self-noise level only very slightly less than the well-rated PDM-661: ‘quite good for such a relatively small and inexpensive recorder’. His Avisoft website has a useful comparison table which can be inspected here.

If you’ve got £350, and you’re not a journalist or researcher who needs to record and transcribe a lot of interviews, the R-26 looks like the best all-round choice. Its six channels offer plenty of scope for experimentation, particularly with indoor environments like rehearsal rooms, concert halls and studios.

The machine that can do it all, like a Swiss army penknife, is a familiar marketing claim. A musician is likely to use more of the R-26’s functions than a field recordist would. Its size and aggressive, eye-catching design means it can’t go everywhere that a smaller, more discrete recorder can. But there are still plenty of roles which it might suit.

Next month I’ll describe a plan for building an array of field recording equipment which allows you to increase its scope and quality, but without wasting money by making any of its components redundant.