THE PREVIOUS POST in the field recording system series looked at the Sony PCM M10 recorder and introduced a few technical concepts which are good to know about.

There’s a YouTube genre in which new electronic products are unwrapped by their purchasers. The excitement is all in the slow revealing, consumerism’s striptease glimpse of paradise, like some old sultan taking delivery of his latest wife.

On the plus side the videos show you what accessories are in the box. The PCM M10 comes with an AC adaptor, a wired remote control which will be useful for recording interviews, a wrist strap, a USB cable, and a CD with a basic version of Sony’s Sound Forge audio editing program.

What’s not included are decent rechargeable batteries, a case and, most important of all, a windshield.

Photography can draw on glamour and urgency: paparazzis chasing celebrities, nocturnal mementos from the fleshpots of the Balearic islands. Field recording is more about patience and stillness. You can’t imagine a film like Blow Up being made about a field recordist.

Handling noise caused by fidgeting with the recorder while it’s doing its job, or other self-made sounds like loud breathing and rustling clothes, are the equivalent of taking a photo with your finger over the lens. They’re distracting and should be avoided. Another common problem is wind noise and to deal with it you’ll need to buy or make a fake-fur windshield for your recorder.

Wind noise is caused by turbulence in the airstream buffeting the microphone’s delicate diaphragm. It’s recorded as an intrusive low-frequency rumbling noise which is very hard to remove in post-production. The long fibres of a fake-fur windshield work to dissipate some of the energy of that turbulence. At the same time, the open weave of the fur’s base material allows air molecules to carry their bump-my-neighbour propagation of sound waves through to the recorder’s mics.

I was going to record a before-and-after demonstration of how effective a furry windshield can be. But Vimeo contributor Joshua Denny has already made one involving a PCM M10:

Note how the windshield can cope with a draught of whatever velocity a fan produces, but don’t expect miracles in a Force 8 gale. The breezy conditions common in our maritime climate or the gusts deflected downwards to street level by tall buildings are what a fake-fur windshield can usually handle.

Sony make one for their little recorder, but it costs at least £50. This is a ridiculous sum to pay for a scaled-down version of the fluffy pencil case with wobbling eye-buttons that you had as a kid. Three other firms also make furry windshields for the PCM M10. They’re all cheaper, but they’re not all as good as one another. 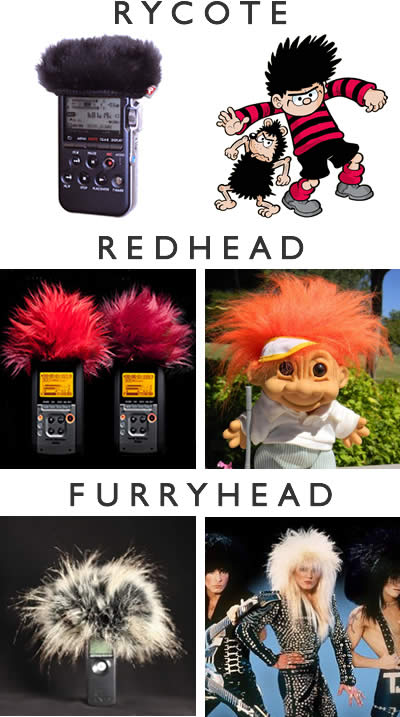 The one at the top made by British firm Rycote seems to take its inspiration from Dennis the Menace and his doggy pal Gnasher. The fur is quite short, and the whole windshield maintains a tenuous grip on the top of the recorder. It falls off quite easily and for that reason it’s not recommended.

Redhead are based in Hawaii and their windshields have longer fur and an elasticated, um, sphincter-like opening which grips the recorder firmly. They work well, as you can see and hear in the video above. Mine took just under two weeks to arrive in the post.

Redhead’s products are made in a range of sober and manic shades. If you want to record birdsong it’s a good idea to resist the urge to buy a red windshield, as birds spot red very easily with their excellent colour vision. Troll dolls are one of Denmark’s gifts to the world, not Hawaii’s, so the local culture theory falls down here.

Furryhead windshields come from Michigan. Although much of the best music has emanated from Detroit, the state capital, Alice Cooper and Ted Nugent are also Michiganites. It’s obvious that Furryhead’s products are rock-influenced and pay homage to 1980s hair-metal bands like Tigertailz.

Batteries last a long time in the PCM M10, but the two AA alkalines supplied by Sony aren’t immortal. Standard rechargeable nickel-metal hydride (NiMH) batteries might seem the obvious way forward, but they lose much of their charge over a few weeks when left lying around unused. Sod’s Law dictates you’ll want your recorder in a hurry only to find the batteries have gone flat.

Sanyo developed low self-discharge NiMH batteries a few years ago and marketed them under the title of eneloop. These hold most of their charge for at least a year when left alone. You never see them in the shops in Britain. Instead, a brand with the slightly unfortunate name of ReCyKo uses the same technology and these can be found in high street and retail park stores like Currys. 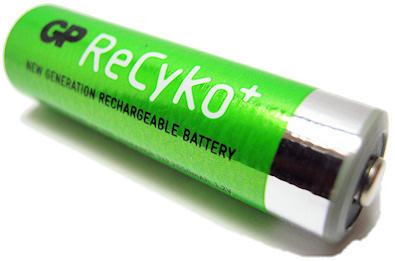 They need a special charger which you can buy in a blister-pack along with four AA-sized ReCyKo batteries. It’s a good investment.

If you want a little case for your PCM M10, then ones made for Tom Tom-style satnav devices should fit just fine. They’re about £20 from PC World, or else around £10 from street market stalls.

The next post in the field recording system series examines how you can capture vivid and realistic stereo soundscapes with your compact recorder by using binaural or headworn mics.