THE ALLHALLOWS MARSHES lie towards the east of the Hoo Peninsula, the fat tongue of low hills and floodplain lodged in the Thames Estuary’s mouth. Here are a couple of recordings and a photograph from Saturday just gone by.

The marshes are separated from the northern part of the Isle of Grain by the Yantlet Creek. Looking across the creek from the Allhallows side you see a mysteriously empty quarter. On the Ordnance Survey map, part of it is corralled by magenta-coloured arrows and designated a Danger Area.

What goes on there? With no easy way across the creek I wasn’t able to find out and, besides, stumbling around inside a Danger Area didn’t seem like a good idea.

The variety of bird calls and song in the marshes was satisfying enough. You can hear the staccato cackle of a marsh frog near the beginning as well:

Here’s the recording spot with the Isle of Grain’s power station to the south:

The Thames is the most dynamic and changeable part of the landscape around London. Places we now trust as solid ground were once marshland or completely submerged. The Anglo-Saxon placename suffix -sey or -sea denotes an island, and Battersea, Chelsea and Bermondsey were all once marooned until people strove to consolidate them with the mainland.

When the river has its way the reverse can happen: islands are scoured away or lost to rising sea levels. The Ordnance Survey map of the early 1800s shows a blob of land at the mouth of the creek called Yantlet Island or Lobster Island. It’s gone now. 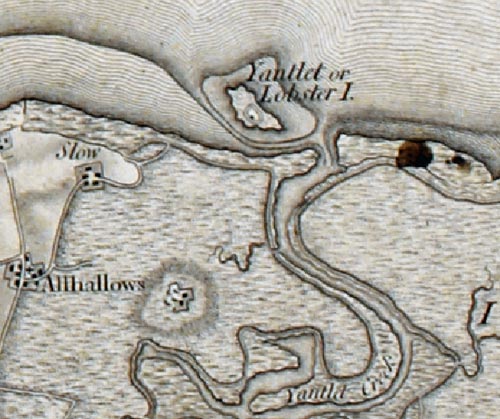 The ‘consignment station’ shown as an enclosure on a later nineteenth-century map has also disappeared. Only a cairn of stones and cement remains, with a hollow space where a plaque might once have been.