The EU referendum and the silence of the streets

THE EU REFERENDUM vote is due tomorrow, June 23rd, but the campaigners haven’t made the streets resound with action, which is what urban recordists like me yearn for.

So far I’ve had one campaigner knock on my front door, and there have been a few stalls in pedestrianised shopping streets and outside tube stations. In London the Remainers are more visible than the Leavers, but they’re not much more audible. One old chap was politely trying to dish out Remain literature with all the passion of someone advertising a church jumble sale: “Leaflet sir? Leaflet madam? We’re stronger in Europe.”

Mainstream politics had more of a street presence three or four decades ago. This BBC video about the 1975 European referendum shows a different world of marches headed by Highland pipers, town hall meetings and busy walkabout schedules for politicians.

Just as today, televised debates were of great importance, but they were different in style. Last night’s BBC debate, broadcast from Wembley, had six main speakers playing a kind of conker match armed with some soundbites and their supposed credentials: “speaking as a mother and a grandmother”, “speaking as the only one here who has served in the armed forces” and so on. One Twitter wag described it as looking like the worst Kraftwerk gig ever. 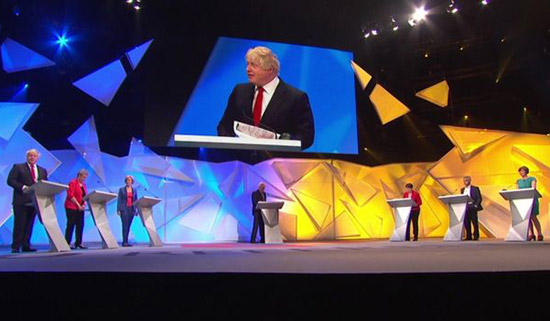 Compare it with the 1975 televised Oxford Union debate, titled ‘A Question of Europe’. Each of the four speakers – Peter Shore, Jeremy Thorpe, Barbara Castle and Ted Heath – are skillful orators and have the time to develop arguments of some substance. The Liberal Party leader Thorpe puts in a particularly memorable performance at odds with his austere, headmasterly appearance, beginning around 27 minutes into the video.

Even as far back as the mid-1970s there was a detectable move away from the rough-and-tumble of the open political hustings towards the security of studio debates and ticket-only election rallies. A pivotal moment in this transition was the public mauling of the Conservative Prime Minister Alec Douglas-Home during the 1964 election campaign in Birmingham. Whilst addressing a crowd at the Rag Market in the Bull Ring, he came under intense heckling from Labour Party and other opponents which eventually overwhelmed him. The event was televised, compounding Douglas-Home’s humiliation. As he noted in his memoirs:

It produced an appearance of strain which inevitably conveyed itself to the television onlookers – I looked rather hunted and that had a bad effect. I blame myself for not studying the techniques of television more than I did.

Attempts by politicians in more recent times to return to the soapbox in the street have been rare. John Major spent part of his youth speaking for the Conservative cause outdoors near Brixton Market and, in 1992, he decided to revive this approach in Luton during the General Election campaign. There’s a Press Association photo of him looking quite cheerful as he contends with Trot Left hecklers, helped by what must surely be called the ‘Executive’ model from the loudhailer range.

Media reactions to this approach were mixed, although it evidently didn’t harm Major’s chances greatly, since he won the election. Less fortunate was the former Scottish Labour leader Jim Murphy, who oversaw Labour’s demolition by the SNP in the 2015 General Election. Murphy had tried for a down-to-earth image by going on a lengthy campaign tour with a couple of Irn Bru crates given prominence as improvised speaking platforms.

The lesson of Douglas-Home in the Rag Market seems largely to have stuck. The Rag Market itself had been a gathering place for radical and labour movement speakers since the 1830s, with some rallies attracting many thousands. The pressure for popular involvement in politics was eventually reflected in the main political parties enjoying very large numbers of members.

In the 1950s the Conservatives had around three million members, and the Labour Party one million. Today’s figures are 150,000 and 270,000 respectively. Even allowing for the fact that many may have joined for pragmatic rather than idealistic reasons, such as making business contacts through a local Conservative Association, or being able to buy a drink in the local Labour Club, mass membership provided a large pool of potential helpers during elections.

Have a listen to the enthusiastic crowds in this 1949 recording from the Hammersmith South by-election in west London. Both Labour and the Conservatives flooded the constituency with hundreds of volunteers, organising marches, rallies and noisy motorcades with slogans broadcast from roof-mounted loudhailers. Below is Mark Kaufman’s photograph of a large crowd attending the hustings in February of that year: 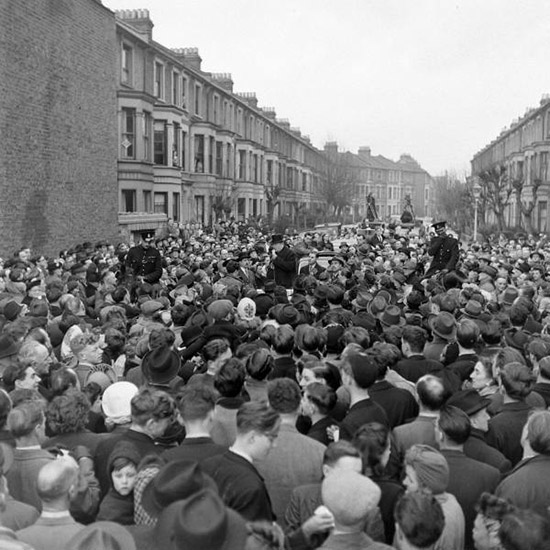 Vocal involvement in politics was expressed and encouraged in other ways too. A common feature of popular political tracts from the late nineteenth and early twentieth centuries is the effort to provide their readers with the ammunition to help them win verbal arguments or debates with friends, workmates and neighbours. Sometimes this was done in the form of a dialogue in which the main speaker would overcome a series of convenient objections from a sceptical listener. Or, the pamphlet might be written in a markedly oratorical style, as though designed to be read aloud to an audience.

The most successful political book to combine both approaches was the socialist Robert Blatchford’s Merrie England, originally published in 1893. It would eventually sell over two million copies across the English-speaking world. 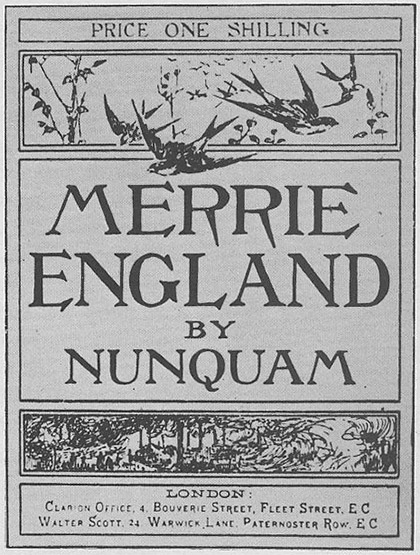 Blatchford begins by addressing an imaginary Mr Smith, a ‘shrewd, hard-headed, practical man’. What better kind of person to be able to convince?

Now, Mr. Smith, if you really are a man of hard, shrewd sense, we shall get on very well. I am myself a plain, practical man. I base my beliefs on what I know and see, and respect “a fact” more than a Lord Mayor. [. . .] Now I assert that if the labour of the British people were properly organised and wisely applied, this country would, in return for very little toil, yield abundance for all.

The goal of face-to-face persuasion is now limited in politics to occasional doorstepping and is absent in political writing. It survives only among Christian proselytisers and in the pamphlets and leaflets they produce. The best-known examples are the inadvertently entertaining Jack Chick tracts from the United States, and which are sometimes found in religious bookshops in this country.

You may detect a note of regret here and you’d be right. An atomised society is a difficult one to record.