Select a place by clicking on either a yellow spot below or its name from the list further down. 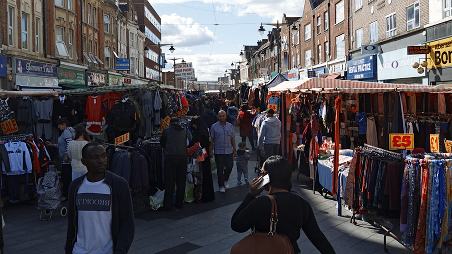 Description: Starting at the junction of East Street and North Street. Traffic on North Street, receding; some small object falls and skitters on the ground; a man calls out to an acquaintance; a child's voice; chopping sounds from a fishmonger's stall; a growing number of voices; footsteps; faint noise of cutlery from a cafe; rattle of shopping trolleys; recorded music from a stall; a clothes seller raises his cry; a radio plays at a stall; electronic cheeping sounds from a toy stall; traffic noise grows louder; a reggae version of 'Stand up, stand up for Jesus' plays from a stall.

Comments: The market sounds quieter compared to this recording made in 2015, but at least some of the difference could be attributed to the earlier recording having been made an hour later in the day.