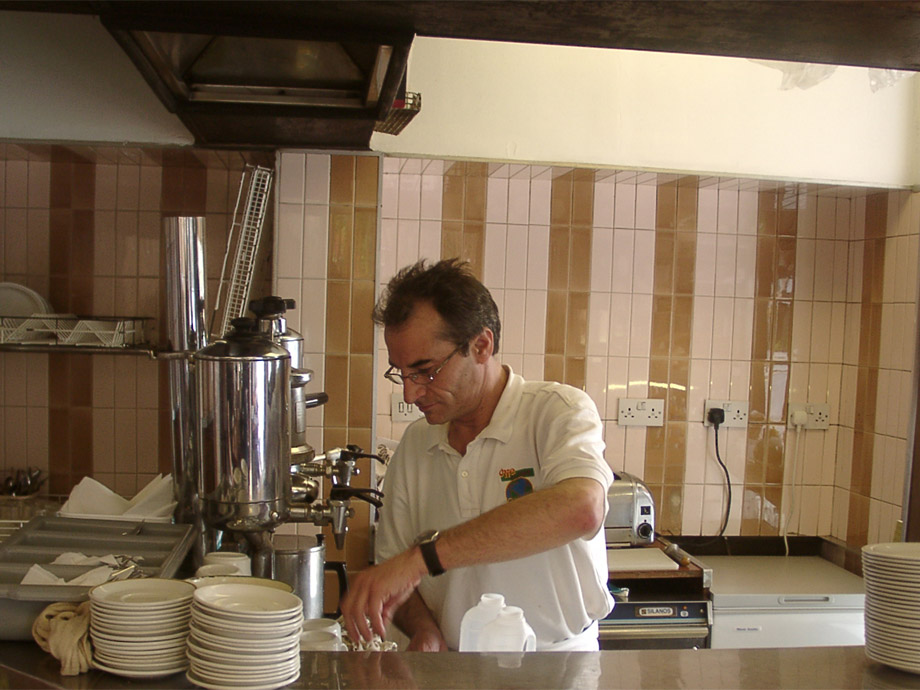 London’s original Little Italy lay in a rough triangle bounded by Clerkenwell Road to the south, Rosebery Avenue to the west and Farringdon Road to the east. The spiritual centre of the district is St Peter’s church on Clerkenwell Road, from which issues the annual procession of Our Lady of Mount Carmel – you can listen to a recording of it on this page.

The Italian presence has dwindled and dissipated over the years, and several of the cafes shown here are now no more. Muratori’s was quite a large establishment at the top of Farringdon Road on the corner with Margery Street. John the proprietor was an approachable man, seen below next to the cafe’s gleaming Still water boiler. A crowd of cab drivers were among his regular customers and John would spend some of the time sitting at their table in conversation. 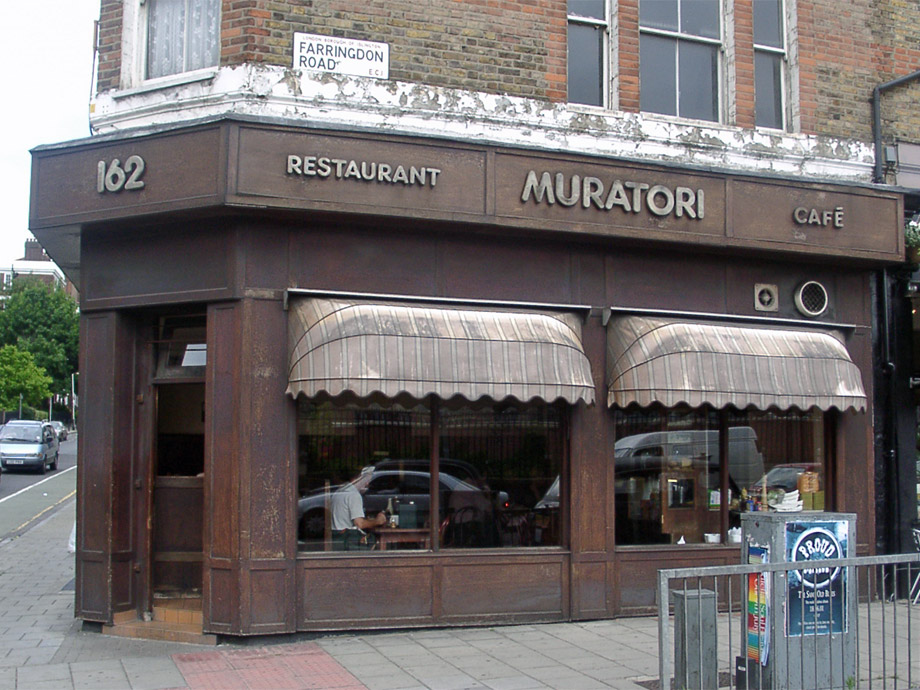 Alfie’s cafe was on Mount Pleasant directly in front of the sorting office. When I visited to take photos several of the Post Office workers were sitting inside the small cafe or on the aluminium chairs arranged outside. By this time I’d printed out some of my cafe photos to put in a ring binder to show people, and both the postal workers and the proprietor looked at them with polite interest. If the proprietor was indeed called Alfie, rather than named in honour of the Michael Caine character, then that’s Alfie pictured below. 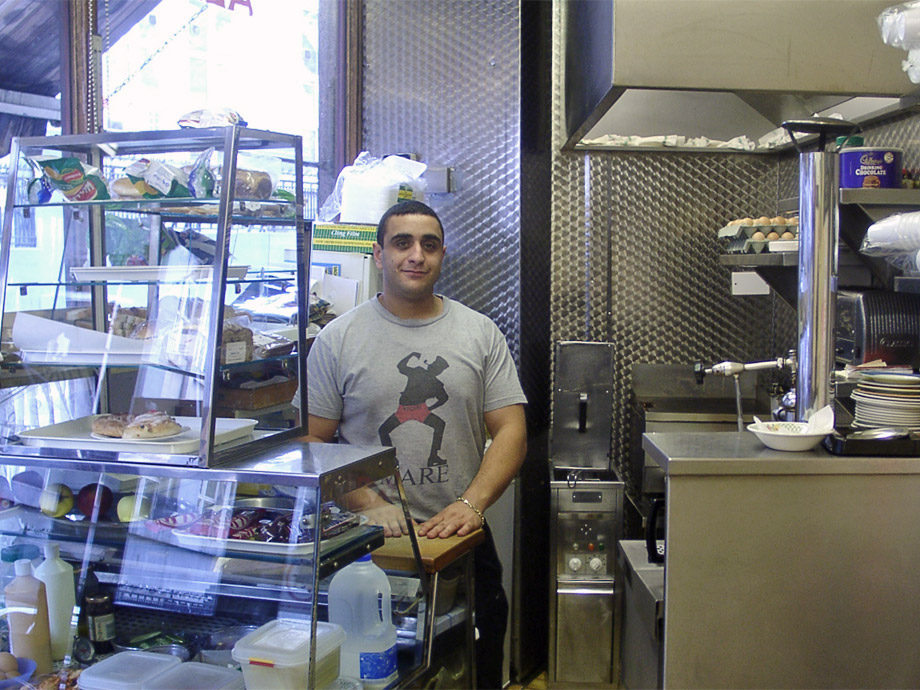 Below is one of the small ornaments decorating the inside. A cafe called ‘First Class’ today stands on the same site, with a sign in the window telling passersby that ‘Good Hygiene Ensures Good Health’. 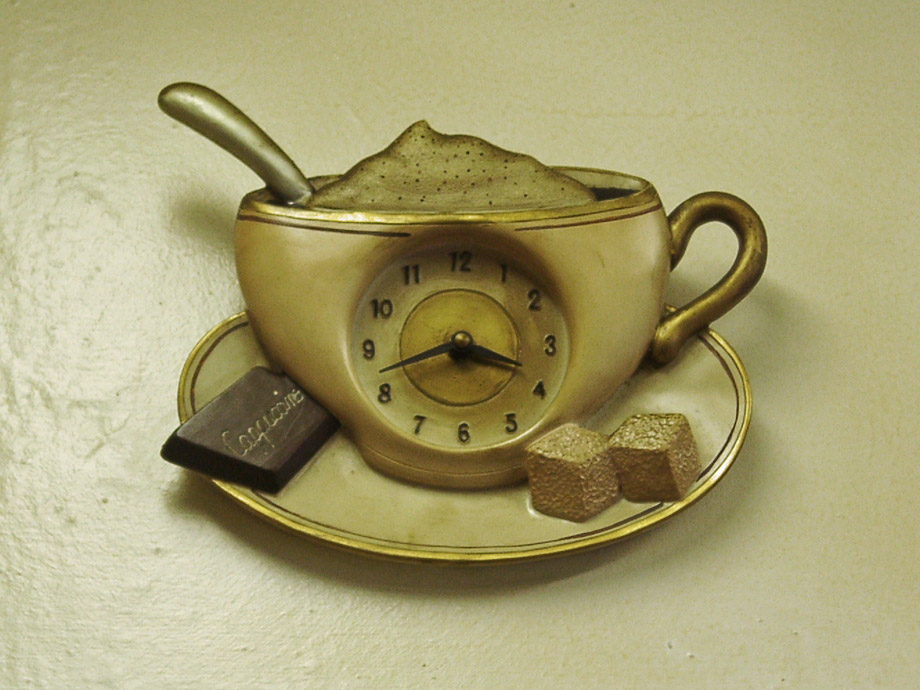 From the junction of Mount Pleasant and Rosebery Avenue extends a triangular plot of land occupied by Barnstaple Mansions, a late Victorian block of mansion flats with shops on the ground floor. There’s a lot of traffic noise and grime around here, and while Rosebery Avenue north of the junction with Farringdon Road has some attractive stretches, the part to the south has more the feel of an arid canyon filled with anonymous and transient life. Somehow despite all this, the flats in Barnstaple Mansions sell for nearly half a million pounds.

Luigi’s cafe was a small, slightly forlorn snack bar on the Rosebery Avenue side which seemed to be entering its terminal phase. The interior was dowdy looking and the proprietor was a woman with a worried, distracted manner. She asked me not to take any pictures inside so I didn’t. Today in its place stands Luis Cafe, which does seem like a truncated version of Luigi’s as if some of the letters had dropped off the original sign to make a new word. It looks a lot brighter and livelier. 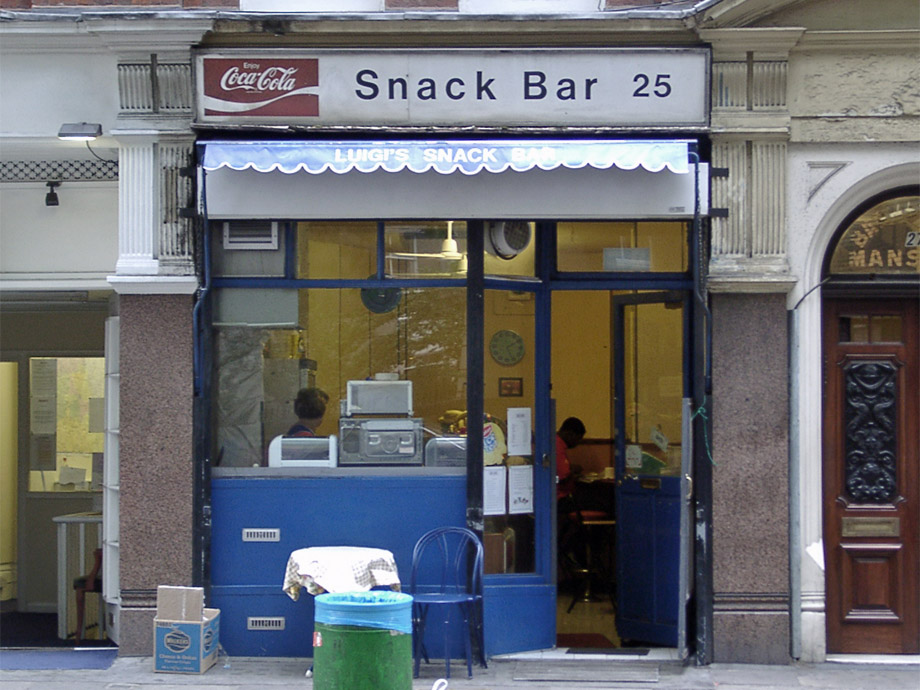 Immediately to the south of Smithfield market are two long-established cafes. The Smithfield Cafe on Long Lane is one of London’s very few 24-hour cafes, alongside the likes of the Polo Bar opposite Liverpool Street station. Beppe’s on West Smithfield is larger and more comfortable, but both do fry-ups with extras like black pudding and fried slice, superior to the all-too-common standards of undercooked bacon and cheap catering-grade sausages.

Pricey restaurants and millenial grub options like burritos dominate the area to the north of Smithfield. In 2001 there were some exceptions, such as the Garfagnana on Cowcross Street. I have a weak spot for painted brick buildings so took a photo. The cafe had extra seating upstairs on the first floor, and I think the family who ran the cafe lived on the top floor. Garfagnana is a region in Tuscany, so you might guess that’s where they were from. 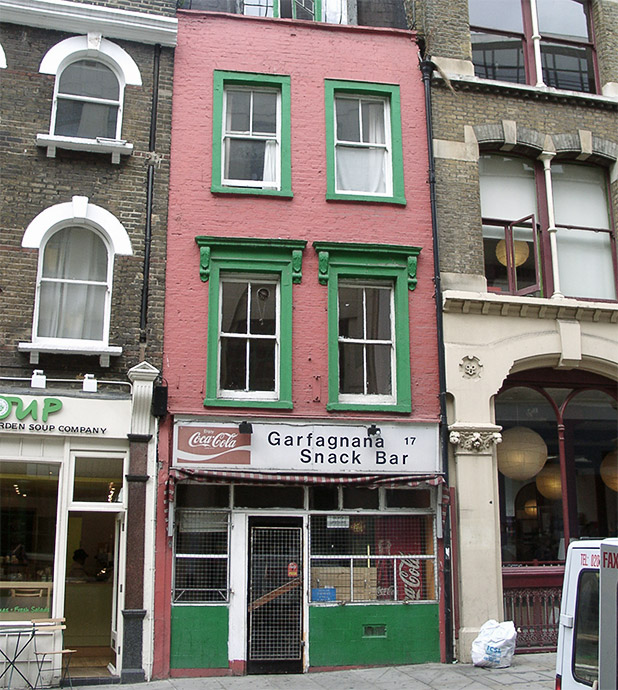 Boggi’s had already closed down by the time I took this photo in a small side street running west off Farringdon Road. For a modern-day survivor from about the same era, there’s Scotti’s Snack Bar on Clerkenwell Green. 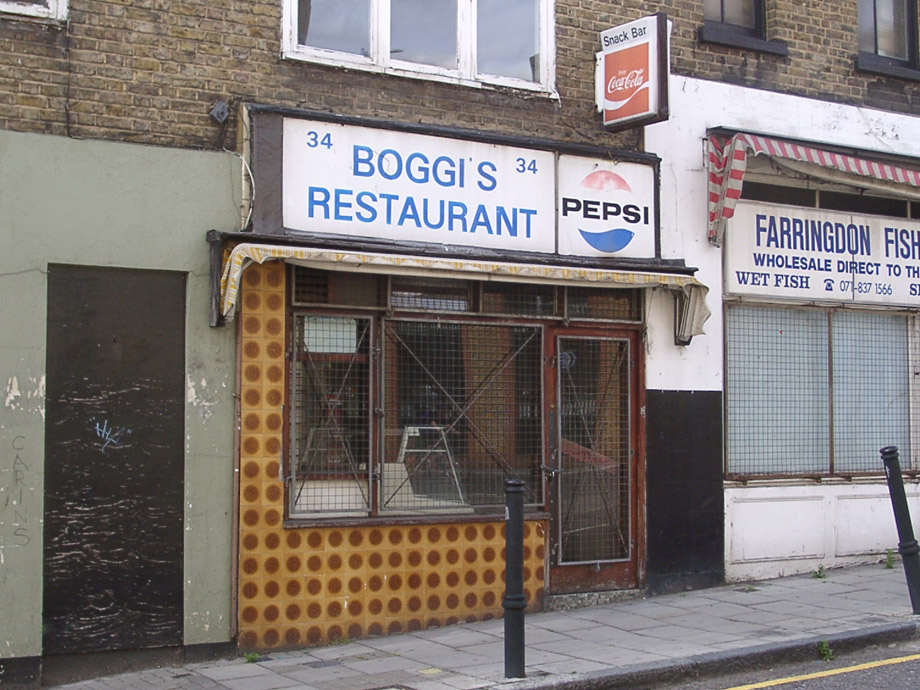 In 2001, Leather Lane market was predominantly for non-perishables, like cheap clothes, five-lighters-for-a-pound, plastic bangles and other accessories. Like the small market at Strutton Ground off Victoria Street, it depended largely on a lunchtime office worker clientele. Since then, it’s been reinvented as a cooked food market selling things like falafel wraps and noodle dishes which you can eat with your fingers or poke at with a plastic fork.

This change has been mirrored to some degree at Brick Lane, and it was rumoured that Westminster council wanted to do much the same for Berwick Street market. Such places are now primarily tourist destinations, suitable backdrops for the smartphone on its selfie stick.

The cafe below was in one of the small streets running between Leather Lane and Hatton Garden. I never saw it open, yet it seemed slightly too opulent to be abandoned. An air of mystery hung over this Marie Celeste of the cafe world. 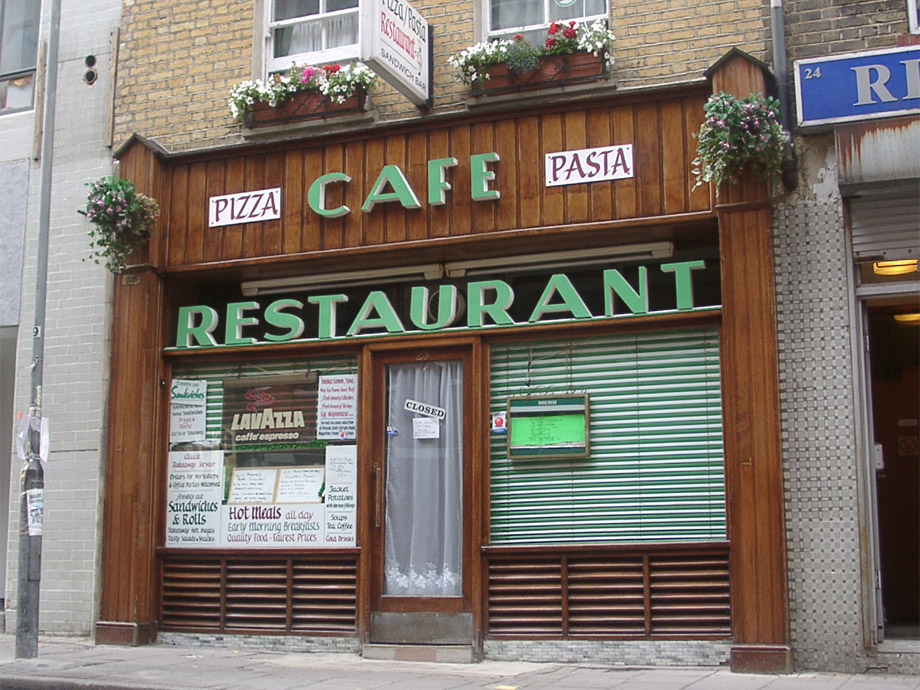 The market on Whitecross Street has changed much as Leather Lane or Broadway Market have. The Barbican Grill was one of several cafes along it, but it’s gone now. The word ‘Grill’ in a cafe’s name used to suggest something a bit more upmarket than a workmen’s greasy spoon, as with the old Clarendon Grill occupying the ground floor of the Clarendon Hotel on Hammersmith Broadway. 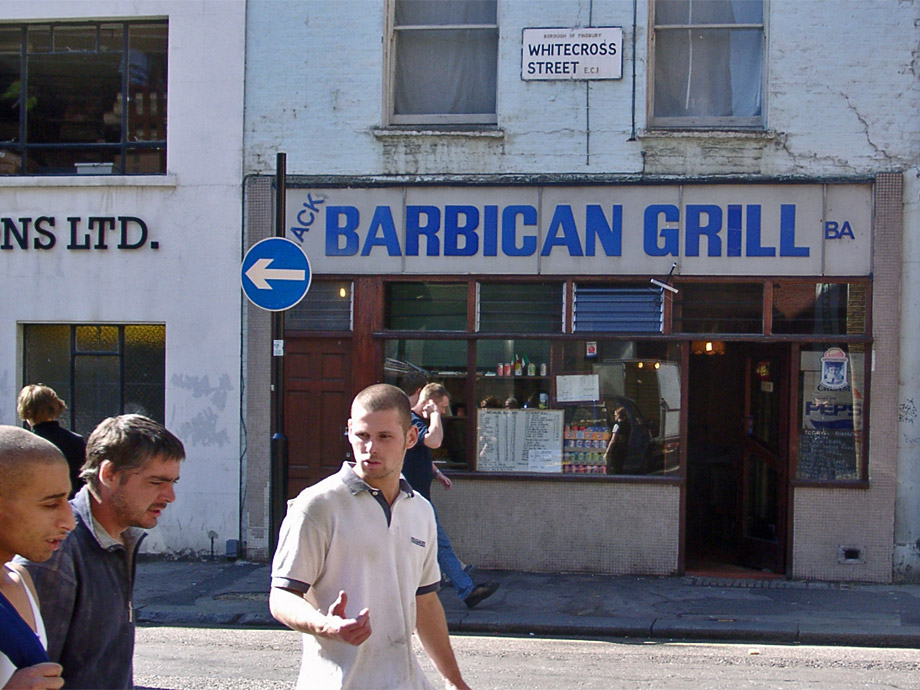 The Clarendon Hotel was a great place, with the moodily-lit Grill, and the basement which was used for club nights including one run by Stevo of Some Bizzare records. Upstairs was used for record fairs but had odd hidden corners, such as a room decorated with Masonic symbols and another used by the Royal Antediluvian Order of Buffaloes.