OWEN STARTS the Violin Machine playing by putting a small, age-tarnished coin into a slotted drawer at the front, which he then pushes shut. The wooden cabinet, lustrous aluminium parts and synthetic-sounding violins all seem to belong to slightly different eras. I'm not able to guess the machine's age.

"This was invented, or patented I should say, in Chicago in 1912," Owen tells me. "The patents were bought by a company called Mills Novelty of Chicago who made coin-operated machines like one-armed bandits, mainly for arcades. This is an arcade machine so it's got a penny-in-a-slot mechanism. It has a 44-note piano in the back and two real violins in the front and they all play from a paper roll." 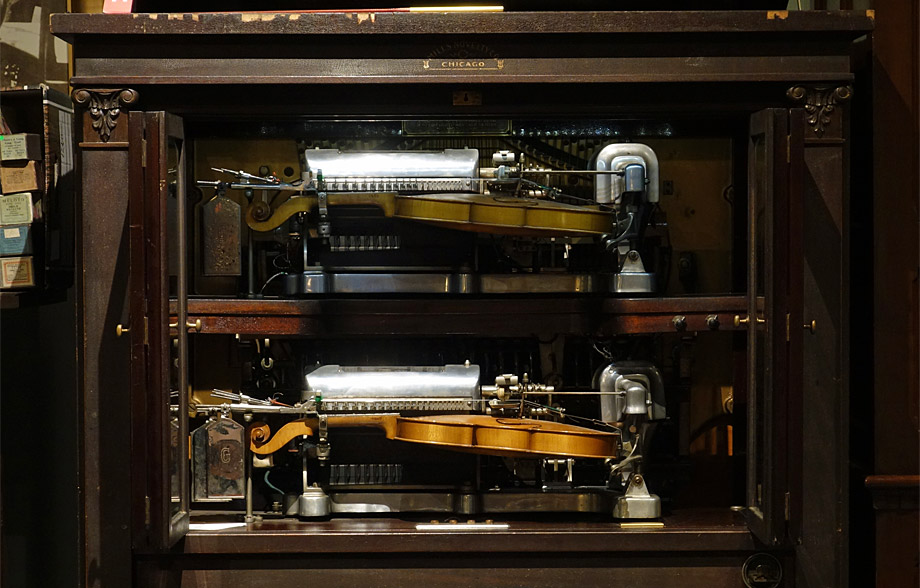 The Violin Machine is electric, unlike most of the Museum's instruments which use pneumatic power. The cast aluminium components give it the substantial look of 20th-century American engineering. However, Owen notes a potential problem with this.

"It's curious because in a similar way, if you own classic cars, you find some of the cast metal is of unstable alloy, and these machines are the same. What they'd got was the hang of casting aluminium and throwing any old rubbish into the melting pot. But unfortunately they'd throw in things like arsenic and the alloys weren't stable. This one is an alloy of aluminium but it's a pretty robust example."

"The violins are played by celluloid bow-wheels. You can vary the speed and it has rosin put on it before it plays to give the right friction, like a real violin. They're old-fashioned steel strings. If you put a modern violin string on that it wouldn't last many days simply because the machine has metal fingers to stop the strings. It puts in a lot of vibrato and it keeps the strings under tension by means of weights."

The prevalence of vibrato in the popular music and singing styles of the 19th and early 20th centuries is something that interests me, so I ask Owen why the Violin Machine uses it.

"I think there are several reasons. First of all, this is not playing classical music but popular tunes of the day, so vibrato suits that sort of music. Although the violins and piano are designed so they stay in tune for an awfully long time, months, without needing attention, a little bit of vibrato covers up a lot of errors. Also, I've heard these with vibrato switched off and the music sounds awful."