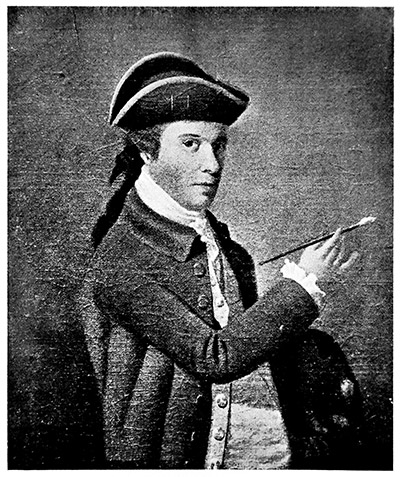 FRANCIS WHEATLEY, R.A.
From the painting by himself in the National Portrait Gallery. 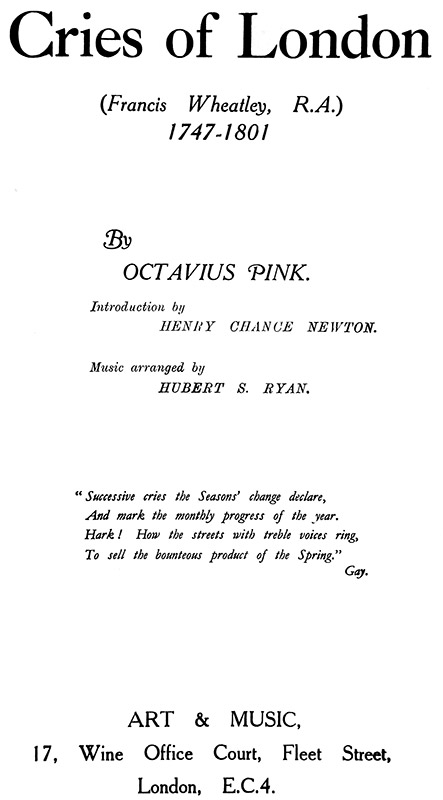 THE now vanished London “Cries” which were still ripe in my boyhood’s days, included such more or less rhythmic specimens as “Buy a Broom,” “Hot Pies” (evidently edibles of the kind for which Simple Simon tried to chouse the Pieman) and the tuneful “Chickweed and Groundsel for your singing Bir-rds!” Also the famous “Hot Codlins” cry which every pantomime clown who knew his business was wont to elaborate in song up to a few years ago.

These ballad-mongers’ cries were often offered at “three yards of songs for a penny” – and I have often bought a few yards of such lyrical treasures.

These nineteenth-century ballad-hawkers were obviously trading descendants of Shakespeare’s wondrous song-seller and crook-caroller Autolycus, with his yard-long ballad, warranted to act as a certain cure “against the hard hearts of maids” – a ballad “very pitiful and as true.”

And not only in Shakespeare do we find these lyrical and other street hawkers. Many a dramatist of William’s period, and a little later, has preserved for us several such needy and sometimes nefarious folk.

Notable specimens of such “crying” pilgrims may be found in the plays of Dekker, the two Heywoods, Nashe, and, of course, Ben Jonson. Indeed Rare Ben’s “topical” comedies are full of such “caterpillars of the Commonwealth.”

Ben’s “Bartholomew Fair” will of course leap into the memory of those who know it, as a very storehouse of “London Cries.”

To conclude this brief Prologue I will (like Silas Wegg) “drop into poitry” – with a little ballad of my own, as thus:

Whenas the Eighteentury waned
Ere yet the Nineteenth saw the light,
One Wheatley with an art unfeigned
Brought London’s Criers to our sight –
And some were sad and some were bright,
But all were drawn with loving eyes;
He drew thirteen, by day and night
A-warbling their quaint London Cries.

Longtime our artist was disdained
By proud R.A.‘s of swankful might,
Anon, their loftiness they strained
To yield him what was e’er his right.
The poor street pilgrims (hawkers hight)
Charmed all by their strange ware and guise:
And so, anon Fame crushed the slight
Of Wheatley and his London Cries.

And here ye see them travel-stained
And oftentimes in poorest plight
For pence (alas, how hardly gained)
They toiled on, oft in fears and fright.
They chortled each “short swallow light
Of song” (which Highbrows would despise)
Eager to dodge Starvation’s blight
They wandered on with London Cries.

BORN when Gaisborough and Bartolozzi were 21 and Romney 14, Francis Wheatley soon began to show an interest in the artistic. He was barely fifteen before he obtained his first award from the Society of Arts, and at the age of 18 was “hung” at the Society of Artists.

His ambition soon led him further afield than “Suburbia,” although at this period it must be remembered, there were many rural scenes to inspire an artist in the course of an easy walk round London. Thus, roughly from 1774–1784, the artist was constantly making expeditions farther afield including the Isle of Wight, Cumberland and Ireland, etc.

Wheatley was elected an Associate of the Royal Academy in 1790 and a full member in 1791.

This higher honour, so quickly reached, was owing to accidental circumstances.

The facts briefly were these. The King, George III., with whom Lawrence was a great favourite, was anxious that he should become a member of the Royal Academy, but by a law of its own, they could not elect a member under the age of 24, so as Lawrence was only 21, he was ineligible.

It was suggested that Lawrence should be elected a supplemental Royal Academician, but this was opposed by 37 members, who brought forward “one Wheatley,” and elected him against the wishes of the King and Presidential (Reynolds was then President) candidate. In the following year (1792) Lawrence was appointed principal painter in ordinary to George III.

It is evident that in 1791 Wheatley was engaged in painting his famous “Cries:” (The “Cries of London” it is recorded were sung to the tune of “Hark the merry, merry Christchurch Bells,”) for in the Academy of 1792, six of the cries were exhibited, six in 1793, and two in 1795.

True, artists of all countries and times have delighted to represent the peculiarities of costumes and character which belong to the history of street cries, and the cries, for from the time of Elizabeth to the present day, authors, artists and printers have combined to issue these street songlets in one form or another; but to Wheatley must be given the credit of handing down to use “Cries,” both artistic and picturesque.

In common with all 18th century colour prints, “The Cries of London,” printed in colours, have enormously increased in value; thus we find the Wheatley “Cries” realizing £1785 for the set of thirteen.

The advertised price of the plates when first issued in 1795 by Colnaghi, were 7/6 each plain, or 16/– coloured.

One of the engravers of the Wheatley “Cries” was Luigi Schiavonetti (1765–1810), who was assisting Bartolozzi about 1800. This no doubt accounts for the similarity in the work of these two artists. Schiavonetti died in Brompton, 7th June, 1810, and is buried in Paddington Churchyard.

N. Schiavonetti, Junior (1771–), was the younger brother of Luigi and worked chiefly in conjunction with him. He assisted in the plate of the “Canterbury Pilgrims.”

Gaugain (Thomas), 1748–1805, was born in Abbeville, in France, and came to this country at an early age. He lived for many years at No. 4, Little Compton Street.

Vendramini (Giovanni), 1769–1839, came to England when 19, and was one of the ablest pupils of Bartolozzi, to whose house at Fulham he succeeded in 1802. In 1805 he went to Russia, and for 2 years was in the employment of the Czar, who so much admired his work, that when he desired to leave, he was unable to obtain permission, and was compelled to effect his escape in disguise.

Vendramini died at his house in Regent Street, on 8th February, 1839.

The wish to see the Wheatley pictures, side by side with the “Cries,” is an old one of mine and it is through the ever-ready courtesy of the Editor of the “Connoisseur” that I have been privileged to reproduce this famous series.

Also my hearty thanks are due to my friend George. 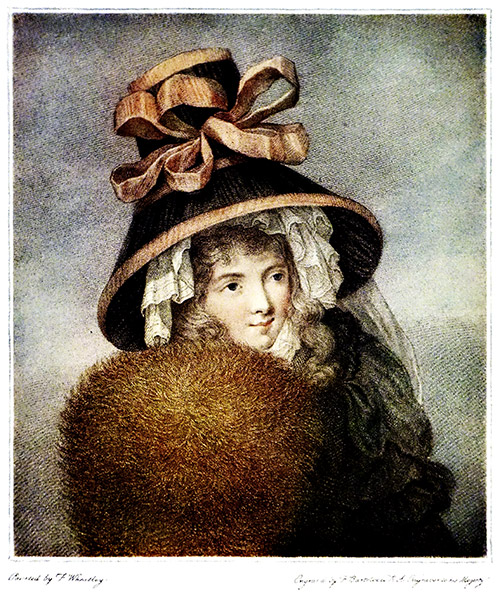