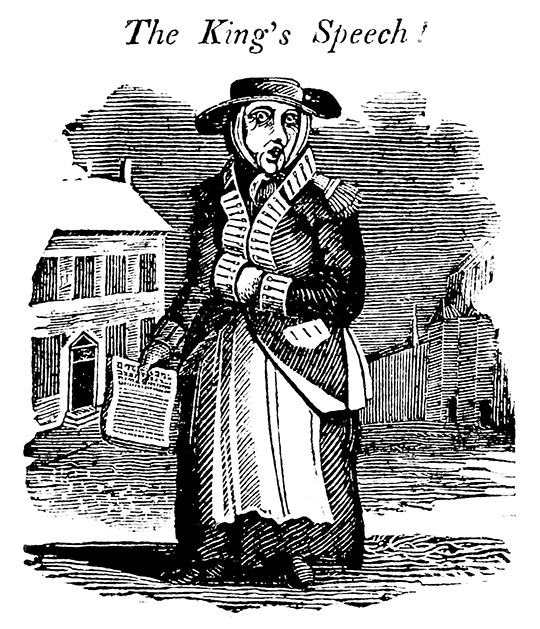 ’Tis very proper to be known
Whatever may come from the throne.
This GRACIOUS SPEECH, ’tis said, contains,
Something that will assuage our pains;
But must new taxes yet continue,
Still to increase the revenue?

POOR woman! The old soldier’s jacket may keep her warm, and her large hat may prevent her shoulders getting wet. The money she gets by selling the speech, may perhaps buy her a good strong cloak, she seems almost tool old to be exposed in the open streets to the cold weather. It will be pleasant to learn by the speech, that the war is likely to be at an end; it must be more advantageous to the country at all times, to keep the sword in its sheath, than to suffer it to be used at all, even in what is called a just cause; you know, the other day, when your school-fellow Ben Dawson, considered himself injured by the insults of rude Harry Robinson, he fell to fighting, thinking by thus retaliating upon a received injury he should obtain the mastery over his antagonist, but what was the result, why his opponent’s strength proved the greatest, and poor Ben was obliged to give in, and contentedly sat down insulted and bruised; now if he had been only wise enough to bear the insult without opposition, he would only have had to experience one inconvenience instead of two.

Let dogs delight to bark and bite,
For God hath made them so;
Let bears and lions growl and fight,
For ’tis their nature too.

But children, you should never let
Such angry passions rise;
Your little hands were never made
To tear each other’s eyes.

Stern winter is no sooner gone,
And nature’s milder garb put on,
Than young and tender cresses grow,
Where smooth streams and rivulets flow.
These at once to town town we bring,
And announce th’ approach of spring. 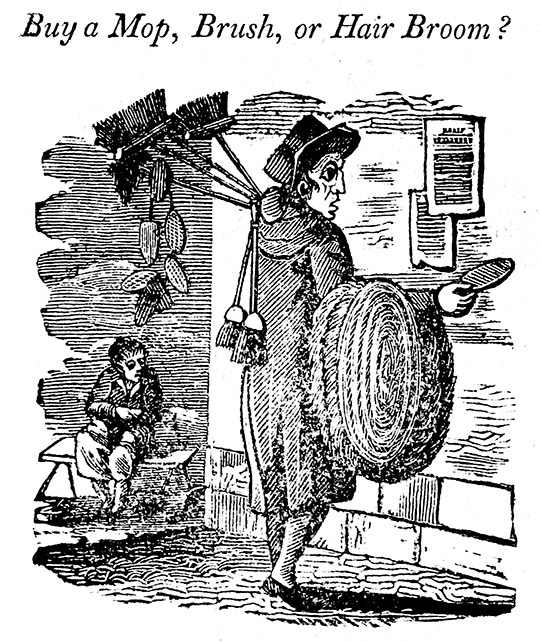 Good money he takes, and bad he refuses,
For a mop, or a broom, as his customer choose,
To keep places clean and free from filth,
Tends greatly to preserve good health.
Then buy of me my mops and brooms,
And quickly ply them to your rooms.

ABOUT 50 years back, there crept along a sleek-headed, whimsical little old man, commonly called The Wooden Poet, from his crying wooden ware, which he carried in a basket slung round his neck, about the streets; chaunting a kind of song, in doggerel rhyme, nearly as can be recollected as follows:–

Come, my good soul,
Will you buy a wooden bowl?
I am just come from the Borough,
Will you buy a pudding-stirrer?
I hope I am not come too soon,
But you may buy a wooden spoon!
I made all the haste I was able
For fear you should want a good ladle,
And if I am not come too late,
Please to buy a trencher or wooden plate;
Or, if they won’t do, its no great matter,
So you buy of me a wooden platter;
It may help you and me to get a dinner,
If you buy of me a wooden skimmer.
Come, neighbours, come, I deal just and fair:
Come, and buy all sorts of wooden ware.

THESE and other cries, used to be so much noticed, that Shuter, the most luxuriant comedian of his time, frequently entertained the audience on his benefit nights, with an admirable imitation of them; which were styled in the play bills, “The Cries of London.”

Let not ambition mock their useful toil,
Their homely songs, and destiny obscure;
Nor Grandeur hear with a disdainful smile,
The short but simple annals of the poor.

Hearth-brooms, brushes, sieves, bowls, clothes-horses, and lines, and almost every household article of turnery, are cried in the streets.

Some of these walking turners travel with a cart, by which they can extend their trade; but the greater number carry their shop on their shoulders, and find customers sufficient to afford them a decent subsistence. 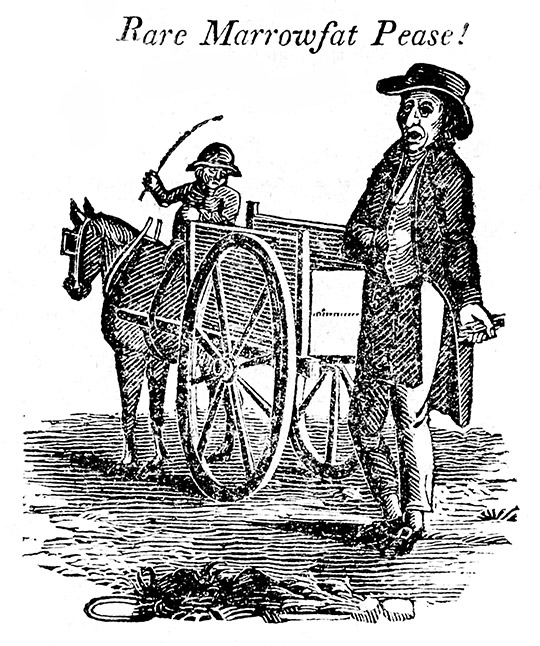 Six-pence a peck, these peas are sold,
Fresh, and green, and far from old;
Which as times go cannot be dear,
And don’t forget the time of year.
See for yourselves, they are clean and round,
As any peas that can be found,
Just come growing from the ground.

THE earliest pea brought to the London market is distinguished by the name of Hastens; it belongs to the dwarf genus, and is succeeded by the Hospur. This early pea, the real hastens, is raised in hot beds, and sold in the market at the high price of a guinea per quart.

Colly Molly Puff was a singularity in the reign of James the 2d. This little man who had nothing at all striking in his appearance, and was but just able to support the basket of pastry, which he carried above his head, sung, in a very peculiar tone, the cant words which passed into his name. The spectator, No. 25, informs us that he was called Colly Molly Puff. This singularity was very advantageous to him, as it rendered him one of the most noted of the Cries of London. Of this humble creature, who was “crawling between heaven and earth” nothing more than the above is any where recorded. 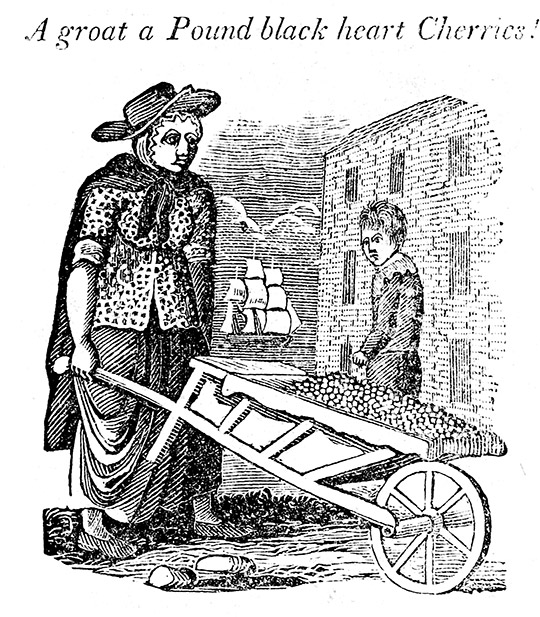 Delicious to the taste are found
Those tempting cherries, sound and round.
No where better will you meet,
For like sugar they are sweet:
But if you should incline to buy,
Be so kind first one to try. 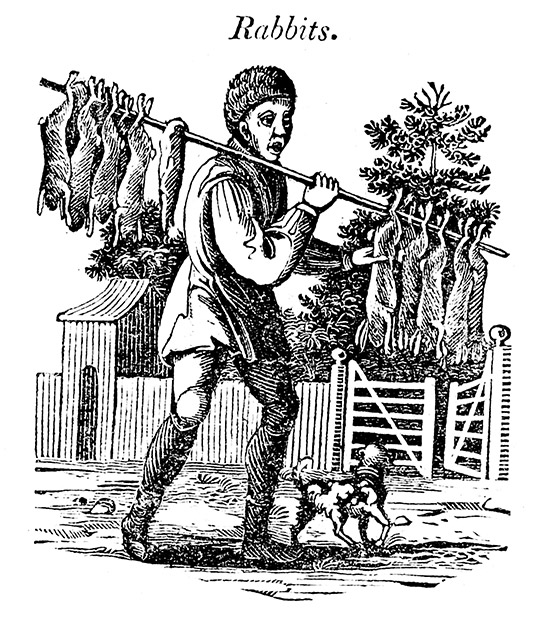 The Rabbits on a pole are hung,
And then across his shoulders slung.
With a loud, now still louder voice,
He calls to all to make their choice.
But if his trade you should not know,
Soon you will hear by ‘RABBIT HO!’

RABBITS were originally natives of hot climates; they were known to the Greeks; and it appears that the only countries in Europe where they anciently existed, were Greece and Spain. From thence they were brought into the more temperate climates of Italy, France, England, and Germany, where now they are naturalized; but in colder climates, as Sweden, and other northern parts, they can scarcely be reared in the house, and perish if they are left in the fields. The holes which it digs in the earth, where it retires in the day, protect it from the wolf, fox, and birds of prey: it is a timid but sagacious animal, its food is excellent, and its fur is very useful for making hats, and what is unfit for that purpose has been found as good as down, for stuffing beds and bolsters.

Norfolk, Cambridgeshire, and Lincolnshire, are the counties in England where rabbits most abound. Though this animal bears a striking resemblance to the hare, yet they are entirely of a distinct race, and, if confined in the same spot, invariably disagree.

There is hardly any study more interesting than natural history; indeed a considerable share of instruction may be received from a careful perusal of the various habits and dispositions of the brute creation, and every one of them will exhibit marks of the wisdom and excellence of their great Creator, therefore I wish every little boy and girl to interest themselves in this study. 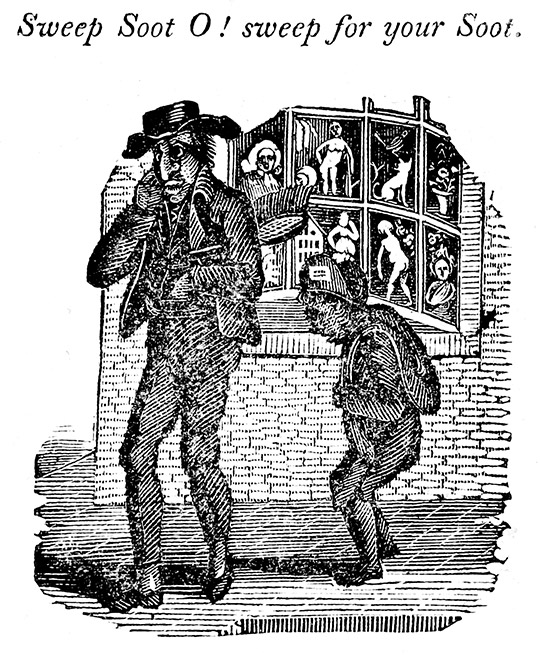 The sweep, perhaps, some may despise,
And view him with disgustful eyes;
But if he sweeps our chimneys clean,
He’s well employ’d, tho’ it be mean.
And of the charge be not afraid,
Give him the soot, the cost is paid.

I HOPE this man will always use the little boy well; many are the instances of cruel treatment they have received from unthinking masters. I much wish this cry was a stranger to London, and every where else; there is a benevolent society established for the abolition of this miserable employ, by endeavouring to introduce a better plan of sweeping chimneys, which, in a little time, may do away the necessity of employing little boys in so dangerous and unwholesome a business.

The poor little fellow in the print seems too young to carry even an empty sack; he is almost bent double with premature exertions, whilst his sturdy master’s loud and gruff voice forcibly strikes the ear when contrasted with the faint cry of his little climber. 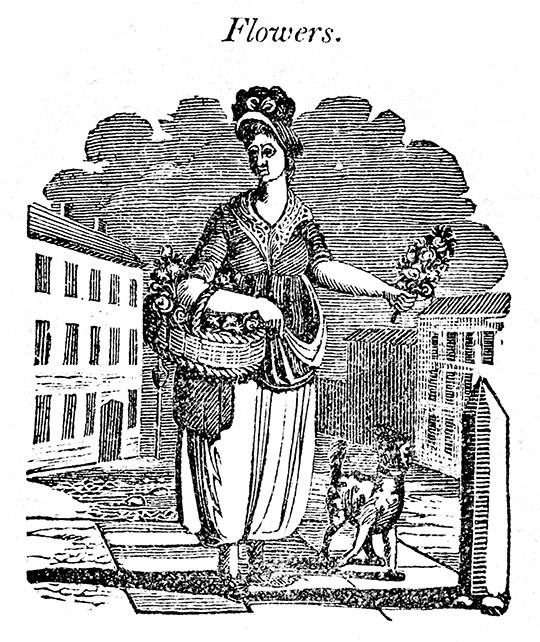 Here are flowers, as fresh as day,
And of those sorts that are most gay:
These pinks and roses, in full bloom,
Will nicely decorate a room.
To crown the whole behold that briar,
Of which the sweetness all admire. 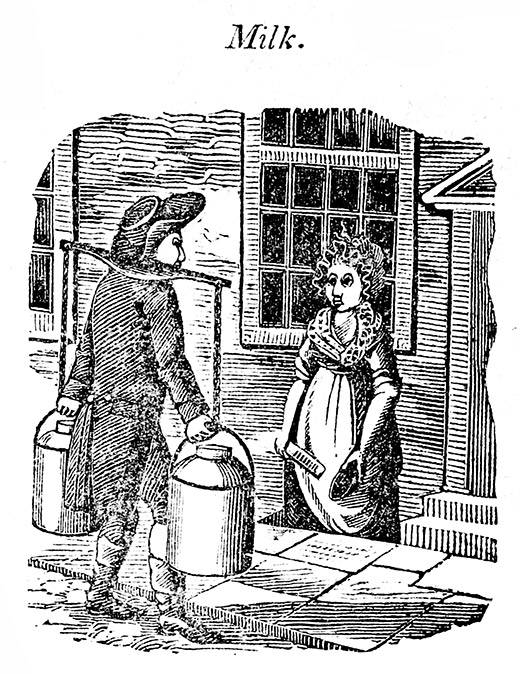 Of his approach to let them know
He shouts aloud with, ‘MILK BELOW’
Be ready maids, don’t make him stay
Time, like an arrow, shoots away.
Fresh from the cow his milk is pure,
And of good measure you are sure.

THIS man sells genuine milk from the cow: he ought to be encouraged, he has taken much pains to make an instrument called a gage that his customers may ascertain for themselves the purity of what he sells; a great deal of bad milk is sold in London; you very well know we ourselves can easily add a little water to it, if it proves too good, but of this there is little fear, the public are seriously imposed upon by the introduction of water, this is an inconvenience which inhabitants of large cities are very liable to experience.

Milk in now very dear, and when a great price is paid, should be good in quality; you recollect having some boiled the other morning for breakfast when you should have had it to eat with bread, it turned to curds, thereby rendered unfit for use, now this would not have been so if the milk had been good.

The cow is one of the most useful animals we have, and deserves to be used kindly and fed on good hay, rich grass, and sweet turnips.

It is calculated that 8,500 Cows are kept for the supply of milk, and that 6,980,000 gallons are annually sold in London. Milk Walks, that is a certain proportion of neighbouring streets served by a particular person, are sometimes disposed of by advertisement, and often for a considerable premium. Cream is sold by the milk-carriers at one shilling and four-pence per pint. 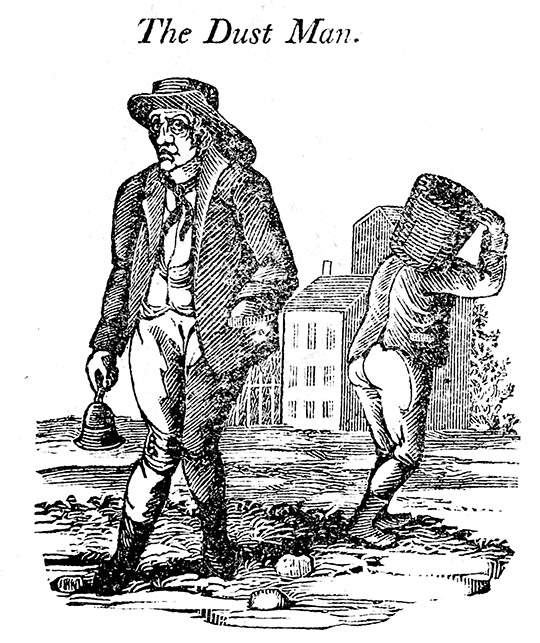 DUST HO! he cries, and with a ring,
The dust he makes them quickly bring;
Which in his cart takes away,
To make his bricks, when mix’d with clay.