AN ACT OF COMMON COUNCELL 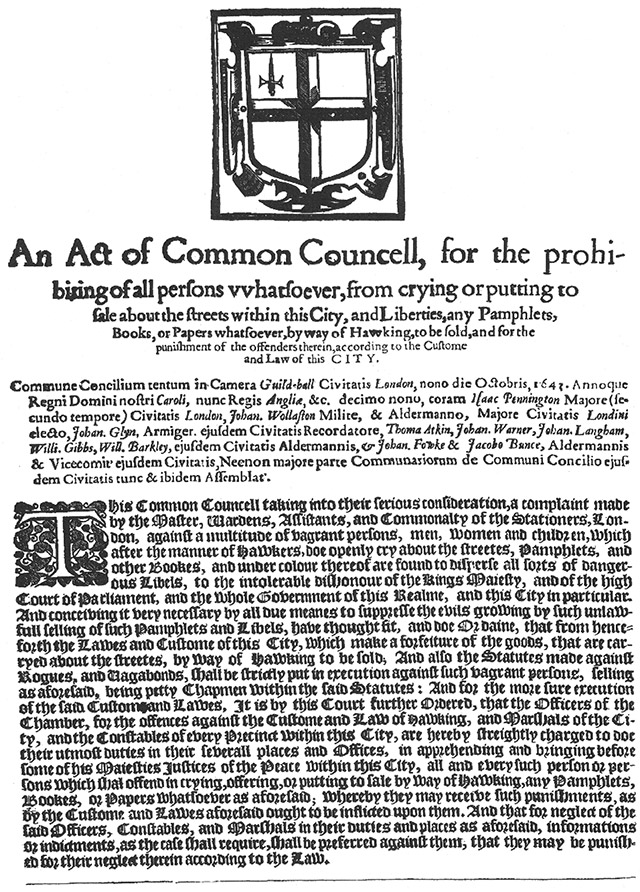 An Act of Common Councell, for the prohibiting of all persons vvhatsoever, from crying or putting to sale about the streets within this City, and Liberties, any Pamphlets, Books, or Papers whatsoever, by way of Hawking, to be sold, and for the punishment of the offenders therein, according to the Custome and Law of this CITY.

This Common Councell taking into their serious consideration, a complaint made by the Master, Wardens, Assistants, and Commonalty of the Stationers, London, against a multitude of vagrant persons, men, women and children, which after the manner of Hawkers, doe openly cry about the streetes, Pamphlets, and other Bookes, and under colour thereof are found to disperse all sorts of dangerous Libels, to the intolerable dishonour of the Kings Maiesty, and of the high Court of Parliament, and the whole Government of this Realme, and this City in particular. And conceiving it very necessary by all due meanes to suppresse the evils growing by such unlawfull selling of such Pamphlets and Libels, have thought fit, and doe Ordaine, that from henceforth the Lawes and Custome of this City, which make a forfeiture of the goods, that are carryed about the streetes, by way of Hawking to be sold; And also the Statutes made against Rogues, and Vagabonds, shall be strictly put in execution against such vagrant persons, selling as aforesaid, being petty Chapmen within the said Statutes: And for the more sure execution of the said Custom and Lawes, It is by this Court further Ordered, that the Officers of the Chamber, for the offences against the Custome and Law of Hawking, and Marshals of the City, and the Constables of every Precinct within this City, are hereby streightly charged to doe their utmost duties in their severall places and Offices, in apprehending and bringing before some of his Maiesties Iustices of the Peace within this City, all and every such person or persons which shal offend in crying, offering, or putting to sale by way of Hawking, any Pamphlets, Bookes, or Papers whatsoever as aforesaid; whereby they may receive such punishments, as by the Custome and Lawes aforesaid ought to be inflicted upon them. And that for neglect of the said Officers, Constables, and Marshals in their duties and places as aforesaid, informations or indictments, as the case shall require, shall be preferred against them, that they may be punished for their neglect therein according to the Law.