Manners and Customs of the Modern Egyptians 1836

A Walk through the Bazaars of Damascus 1906

Calls, Sounds and Merchandise of the Peking Street Peddlers 1936

A WALK THROUGH THE BAZAARS OF DAMASCUS

This is an extract from the fourth edition of Karl Baedeker’s handbook for travellers to Palestine and Syria, published in Leipzig, London and New York in 1906. The lively and detailed descriptions of sellers’ cries and other sounds are almost identical to those in the first edition of 1876, which otherwise gives a less extensive account of the Damascus bazaars. 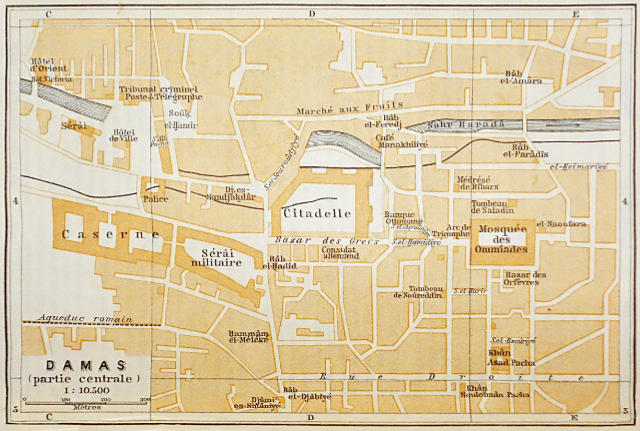 WALK THROUGH THE BAZAARS.

The public life of the city is concentrated in the chief bazaars, and many amusing scenes may be witness here and in the streets. The public writers, who sit at the corners of the streets, are often surrounded by peasants and Beduins, and sometimes by women. The engraver of seals is another important personage here, as the granter of a deed completes it by appending his seal and not his signature. The Persians are particularly noted for their skill in seal engraving and caligraphy. The public slaughtering of animals has become rarer since a slaughter-house was erected in the Meidân. Carts being unknown, the butchers are often seen carrying the carcases to their shops on their shoulders. The BAKERS’ SHOPS interesting. The thin, flat bread is baked by being pasted against the tannûr, or stove. The Orientals prefer to eat their bread warm. The flat cakes are sold by weight, or at about 10 paras each. The boy who carries them about constantly shouts ‘yâ rezzâk’ (‘O Giver of sustenance’, – i.e. O Allah, send customers), or ‘abu’l ashara’ (‘this for 10 paras’). Benevolent Muslims are sometimes seen buying bread to feed the dogs. Finer kinds of bread are also offered for sale. Thus the berâzik is thin wheaten bread, spread with butter and grape-syrup, and sprinkled with sesame. The seller shouts ‘allâh es-snûnû’ (‘food for the swallows’, i.e. for delicate girls). During the fasting-month of Ramadân an unusually large quantity of fancy bread and sweetmeats is consumed. Damascus also contains numerous PASTRY COOKS, whose long tables are garnished with bottles of liqueurs, lightly stoppered with lemons or coloured eggs by way of ornament. Lemonade and other beverages are cooled with snow from Lebanon (20 paras per glass). Ice cream is sold by the CONFECTIONERS. The shops for the sale of comestibles often contain handsome copper dishes bearing inscriptions with elaborate flourishes, all of which are said to date from the time of Sultan Beibars (p. 298). The bazaars also contain RESTAURANTS. Small pieces of fresh mutton with strips of the fat tail between them (kebâb) are slowly roasted on large spits. The traveller may for curiosity taste the flesh of the so-called kebâb in the Greek bazaar (p. 304), where the shops are more civilized than in other parts of the town. Small rooms at the back of the restaurants here, with diminutive stools for diners, are set apart for customers. A peep may also be obtained of a READING SCHOOL, where the pupils recite the Korân in chorus, swaying their bodies back and foward like the children in the Jewish schools. The BARBER, too, in his stall hung round with mirrors, incessantly and skilfully plies his trade of shaving heads and bleeding. Everyone is busy. When the merchant is at leisure he sometimes reads the Korân, repeats his prayers, hires a nargîleh from one of the itinerant smoke purveyors, or chats amicably with his neighbour. One pleasant feature of the scene is that there appears to be no jealousy between the rival vendors of similar wares. ‘Allah has sent a good customer to my neighbour’, they argue resignedly, ‘and will in due time send me one also’. In the same spirit they place above their booths, in gilded letters, the words ‘yâ rezzâk’ or ‘yâ fettâh’ (i.e. O Thou who givest sustenance).

The various street-cries are full of interest. The vendor of REFRESHMENTS, carrying on his back a wide, two-handled jar, with a narrow neck, or a vessel made of glass, rattles with the brazen cups he holds in his hands, shouting – ‘berrid alâ kalbak’ (‘refresh thy heart’), or – ‘itfi el-harâra’ (‘allay the heat’). These are the cries of the dealers in lemonade and eau sucrée. The seller of jullâb, or raisin-water, shouts – ‘mu’allal, yâ weled’ (‘well-cleared, my child’), etc., while the purveyor of khushâf, a beverage prepared from raisins, oranges, apricots, etc., extols its coolness in the words – ‘bâlak snûnak’ (‘take care of your teeth’). Liquorice water and plain water are carried about in goat-skins by other itinerant deals. An interesting custom is the so-called sebîl (p. lxxiv); that is, when any one is desirous of doing a charitable deed, he pays for the contents of a water-skin and desires the carrier to dispense it gratuitously to all comers. Water-bearers with good voices are selected for the purpose, and they loudly invite applicants with – ‘yâ ‘atshân, es-sebîl’ (‘O thirsty one, the distribution’).

FRUIT of all kinds if sold in a similar manner, being generally described by some quaint periphrasis, instead of being called by its name. Many kinds of VEGETABLES are pickled in vinegar or brine and carried through the streets for sale in wooden tubs. The commonest are beetroot (shawender), turnips (lift), and cucumbers (khiyâr). These last form the principal food of the lowest classes during several months of the year, one kind being eaten raw, the other cooked with meat. The cry of the sellers is – ‘yâbu ‘eileh, khudlak sheileh, bitlâtî rotl el-khiyâr’ (‘O father of a family, buy a load; for 30 paras a rotl of cucumbers’, i.e. 5 lbs.). The cress is praised somewhat as follows – ‘orra tarîyeh min ‘ain ed-duîyeh, tâkulha l-ajûz tisbih sabîyeh’ (‘tender cresses from the spring of Ed-Du’îyeh; if an old woman eats them she will be young again next morning’). – ‘Seidnâwi yâ Ba’l’ (‘from Seidnâya, O Baal’) is the cry of the fig-dealers. [Baal now signifies an unwatered or unirrigated district, such as that in which Seidnâya (p. 349) lies; and these districts are considered to produce the best fruit.] – Along with pistachios (‘fistik jedîd’ fresh pistachios), roasted peas are also frequently purveyed, with the cry – ‘umm ennârein’ (‘mother of two fires’), which means that they are well roasted, or – ‘haya halli ma tehmil el-isnân’ (‘here is something too hard for the teeth to bite’). – Hawkers of nosegays cry – ‘sâlih hamâtak’ (‘appease your mother-in-law’, i.e. by presenting her with a bouquet). – The constant din is increased by the lusty singing of the beggars and by the sonorous repetition of the Mohammedan creed by the muezzins, which resounds from one minaret to another throughout the whole city. The scene is frequently varied by the appearance of a Turkish effendi, sometimes accompanied by soldiers, and mounted on a richly caparisoned horse; but his progress is necessarily slow, and his obliged to clear the way by shouts of ‘dahrak, dahrak’ (literally ‘your back’, anglicè ‘get out of the way’).